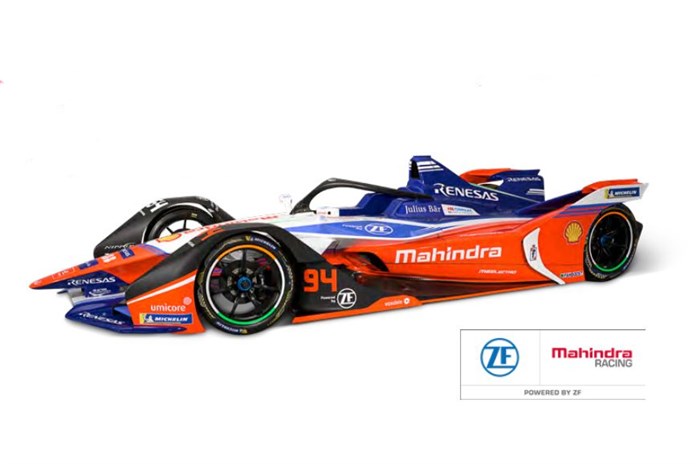 Mahindra Racing has taken the wraps off its new M6Electro electric racer for the 2019/20 season of the Formula E championship, in addition to confirming an unchanged driver line-up and announcing a new powertrain partner.

Formula E will arguably see its most competitive grid yet this upcoming season, with Porsche and Mercedes joining the fray to compete with existing manufacturers like Mahindra, Jaguar, BMW and Nissan. Mahindra Racing has confirmed that Jerome d’Ambrosio and Pascal Wehrlein will continue driving for the team; an unchanged driver line-up undoubtedly helping the team with the development of the M6Electro. The Indian team completed a rollercoaster 2018/19 season in sixth place. It kicked off the season on a strong note, with d’Ambrosio scoring a podium finish at the season opener in Ad Diriyah and then winning the Marrakesh E-Prix, while Wehrlein clinched strong podium finishes in Santiago and Mexico. The string of strong results propelled Mahindra Racing to the top of the teams’ standings, but over the course of the season, its title challenge started to fade. For this season, the team will be looking to consistently secure strong results.

Additionally, technology major ZF Friedrichshafen AG will be joining the team as its new Powertrain Partner, as part of a long-term deal. The company already has significant experience in Formula E, having previously served as technology partner to Venturi since 2016. As part of the new partnership, ZF will support Mahindra Racing’s season six campaign with chassis development work, shock absorber provision and engineering services. A statement released by Mahindra Racing also confirms that ZF is already working on the design and manufacturing of the electric driveline for the 2020/21 season as well.

The M6Electro continues to sport Mahindra Racing’s traditional red, white and blue colours; the overall livery being an evolution of that of the M5Electro. “I am thrilled Jérôme and Pascal will both return to the team for season six. Last season was one of the most challenging seasons in Formula E history, in terms of competition, but we believe we have one of the strongest driver line-ups on the grid to help us achieve our championship ambitions. I am also delighted to welcome ZF to the Mahindra Racing family. We now have one of the most successful global players in the field of e-mobility at our side. We were highly impressed by the performance of the ZF driveline in the most recent Formula E season and together we will be even better positioned to continue celebrating success,” said Dilbagh Gill, Mahindra Racing CEO and team principal.

Former F1 driver Nick Heidfeld will continue in his advisory role and as the team’s official test and reserve driver, while Belgian driver Sam Dejonghe will also continue to work closely with the team in the position of reserve and sim driver. Mahindra Racing will test the M6Electro at the Formula E pre-season test from October 15-18, at the Circuit Ricardo Tormo in Valencia, Spain.