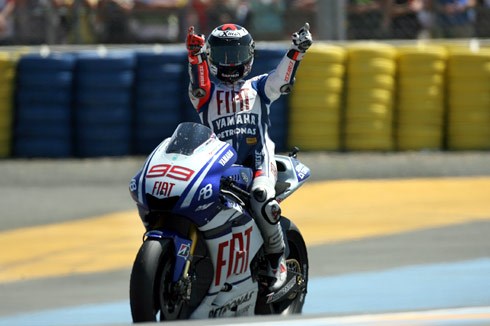 Dani Pedrosa could only manage fifth, elbowed back by Honda team-mate Andrea Dovizioso and Ducati's Nicky Hayden on the final lap, while Casey Stoner crashed out for the second time in three races - leaving him 59 points adrift in the championship already.

Rossi had fended off habitual fast-starter Pedrosa into the first corner, with Lorenzo reclaiming second from the Honda further around the opening lap. Stoner completed lap one behind team-mate Hayden, but after passing the American next time around he set the fastest lap and started closing on the leaders - only to then lose the front end at the La Chapelle corner and slide into the gravel and out.

Rossi, Lorenzo and Pedrosa soon broke away at the front, with the leader under big pressure from his team-mate. Lorenzo slipped through into the first corner on lap eight, only to lose the lead again as Rossi surged back ahead into the chicane.

Two laps later it was Lorenzo's turn to do the outbraking at the same spot and this time Rossi could not respond. Once ahead, Lorenzo proved unstoppable, quickly opening out a comfortable four-second lead.

Pedrosa then hassled Rossi for a while, but soon had to turn his attention to the rapidly-closing Dovizioso, who had earlier passed the fast-starting Marco Melandri (Gresini Honda) and Hayden, then brought the Ducati with him as he closed on Pedrosa.

Dovizioso climbed all over the back of Pedrosa in the closing stages, finally making it through on the final lap, with Hayden following him a few corners later and relegating his former team-mate to fifth as Pedrosa went wide trying to defend.