With the pair and fellow championship contender Marc Marquez sharing the front row, Lorenzo controlled the race from start to finish. 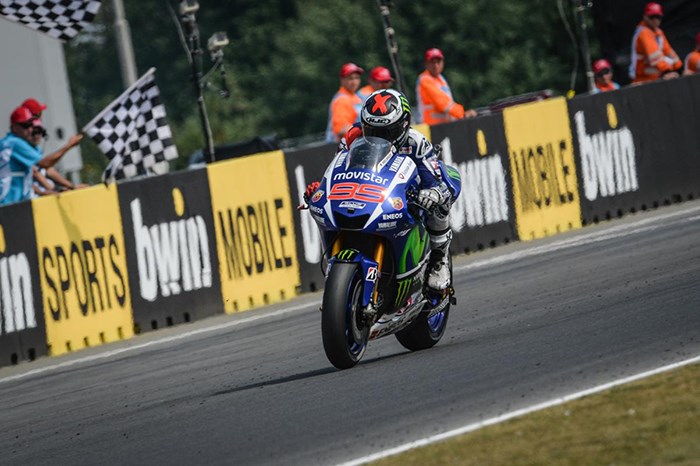 Jorge Lorenzo capped a dominant weekend at Brno with victory in the Czech MotoGP, drawing level with Yamaha team-mate Valentino Rossi in the riders' championship.

With the pair and fellow championship contender Marc Marquez sharing the front row, hopes of a memorable battle didn't eventuate, with Lorenzo controlling the race from start to finish.

The polesitter got the best start and shook off early pressure from Marquez, edging further and further away from the Honda rider during the 22 laps to eventually win by more than four seconds.

With his fifth victory of the season, Lorenzo draws level with Rossi atop the standings, with reigning world champion Marquez 52 points behind them.

Rossi's chances were dashed off the line, dropping from third to fifth following a slow start.

By the time he was back in the top three, after passing Andrea Dovizioso on the second lap, Lorenzo and Marquez were more than two seconds up the road.

That grew to nearly eight seconds by the midway point of the race, and while the Italian ran at a similar pace to Marquez, he had settle for a lonely third.

Dovizioso led the Ducati battle early, but was passed by team-mate Andrea Iannone who took fourth.

In the closing laps, Dovizioso had to defend fifth heavily from Dani Pedrosa, who advanced from ninth on the grid, battling the left ankle injury he sustained in a practice crash on Friday.

In one of the race's few on-track fights, Pedrosa eventually got past the Ducati rider at Turn 8 on the final lap to take fifth.

Maverick Vinales and Cal Crutchlow ran ninth and 10th for the bulk of the race, but both fell at Turn 11 in separate incidents.