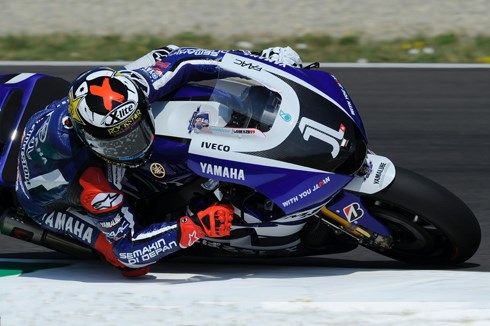 Jorge Lorenzo took the first dry weather victory of his MotoGP world championship defence by hunting down and passing Casey Stoner in the Italian Grand Prix.

Points leader Stoner had looked set for yet another dominant triumph as he stormed away into a three-second lead in the first half of the race, while Lorenzo (Yamaha) was embroiled in a spectacular battle for second with Stoner's Honda team-mate Andrea Dovizioso.

But then Stoner's pace began to fade just as Lorenzo picked up speed - the Spaniard setting a new lap record as he closed in before slicing ahead through Savelli six laps from the end. He went on to take his first victory since Jerez and keep his and Yamaha's title hopes alive.

Dovizioso battled past Stoner to take second with two laps to go, and then narrowly held off his team-mate on the charge to the line, which means Stoner's points lead over Lorenzo is cut to from 28 to 19.

Valentino Rossi gave his hordes of home fans something to smile about as he fought through from 12th on the grid to sixth for Ducati.

Hector Barbera was an excellent seventh on the Aspar Ducati, with Dani Pedrosa a cautious eighth for Honda on his return after a long injury lay-off.

Colin Edwards (Tech 3 Yamaha) and Nicky Hayden (Ducati) completed the top 10, despite the latter spearing through the gravel on the second lap. Alvaro Bautista got as high as sixth for Suzuki with an early charge before tumbling to 13th, while Cal Crutchlow retired his Tech 3 bike with tyre concerns.