The Spaniard beat the challenge from reigning champion Casey Stoner while Valentino Rossi only managed a lowly 12th. 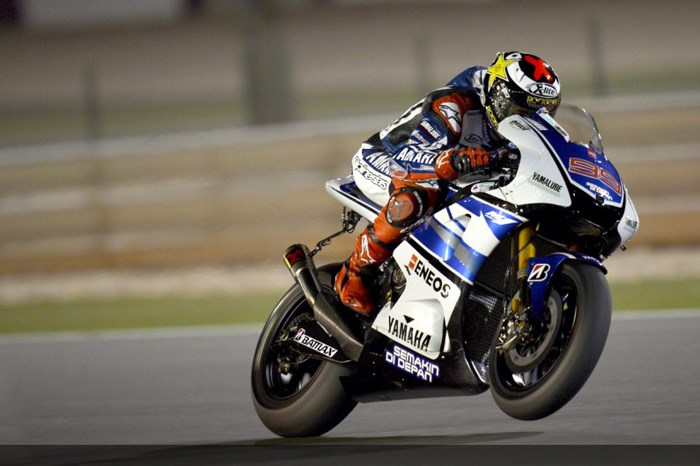 It was reigning champion Stoner who led the way for Honda for most of the hour, as he both topped the part of the session devoted to practice, then improved to a 1m55.149s on his first concerted pole shot with 11 minutes left.

That was beaten by Lorenzo's 1m54.993s for Yamaha just afterwards, and although four-time Qatar winner Stoner fought back with a 1m54.855s, it put him on top for less than a minute before the Yamaha lapped 0.221 seconds quicker. Neither man could get any more pace out of their last sets of soft tyres, so Lorenzo's 19th MotoGP pole was secured.

The second works Yamaha of Ben Spies was left fourth on the grid after crashing with four minutes to go. It looked like the American might regain balance and stay upright, but eventually the bike got away from him.

Nicky Hayden grabbed fifth for Ducati in the closing seconds, but his team-mate Valentino Rossi was the slowest of the prototype riders in a lowly 12th place.

It was a quiet session for Dani Pedrosa (Honda) as well. The Spaniard will line up seventh, ahead of Hector Barbera's Pramac Ducati, top rookie Stefan Bradl on the LCR Honda and late crasher Karel Abraham (Cardion AB Ducati).

Spies and Abraham aside, the session saw five other crashes - all among CRT runners. Danilo Petrucci (Ioda), Ivan Silva (Avintia), Mattia Pasini (Speed Master), Randy de Puniet (Aspar) and James Ellison (Paul Bird Motorsport) were all uninjured in their tumbles, unlike their bikes.

Forward Racing's Colin Edwards was the fastest CRT rider, less than a second off his sometime Yamaha team-mate Rossi's pace on the works MotoGP Ducati.