The Yamaha rider passed poleman Dani Pedrosa's Honda at the first corner and never looked back. 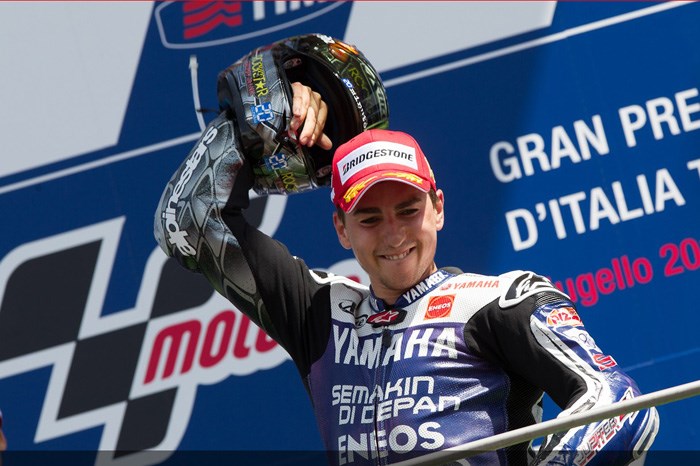 Jorge Lorenzo stretched his MotoGP championship lead with a commanding victory in the Italian Grand Prix at Mugello.

The Yamaha rider passed poleman Dani Pedrosa's Honda at the first corner and never looked back. A minor error at San Donato at the start of lap three was the only crumb he offered his pursuers, but he was soon asserting his authority and establishing a five-second lead that he maintained all the way.

The result was Lorenzo's fifth win of the season, and brought his championship lead back up to 19 points. The Spaniard even had time to wave to the crowd on his final lap.

Pedrosa ended up as Lorenzo's main rival, though first he had to overcome the hard-charging Andrea Dovizioso's Tech 3 Yamaha, which took until lap five.

While Pedrosa at least kept Lorenzo in sight for a while, his team-mate Casey Stoner had a miserable race. The only man to use Bridgestone's alternative rear tyre, Stoner fell to eighth at the start, worked his way back up to fifth, then went though the Correntaio gravel and fell to 10th, recovering to eighth via a clash with Alvaro Bautista's Gresini Honda.

Shortly after losing second to Pedrosa, Dovizioso made a small error and let impressive rookie Stefan Bradl past into third. The LCR Honda rider then withstood many laps of pressure from the race's top Italian, with the Ducatis of Nicky Hayden and Valentino Rossi, and Tech 3's Cal Crutchlow, catching them by the end.

Dovizioso managed to reclaim third and clinch a third straight podium, while Hayden went wide in a last-lap move on Bradl and fell to seventh behind Rossi and Crutchlow.