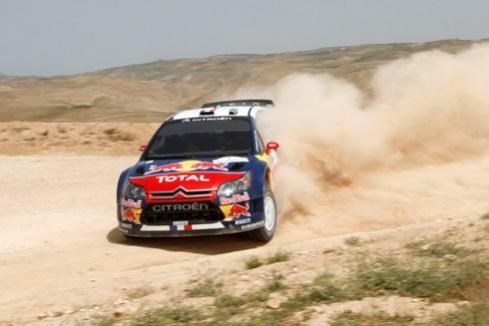 Sebastien Loeb extended his World Rally Championship lead with a comfortable win in the Jordan Rally - an event that will be remembered for the extreme tactics that Citroen and Ford adopted to try and ensure their top drivers had the best possible road conditions on the dusty stages.

Ford's Jari-Matti Latvala had battled for the lead with Citroen's Dani Sordo and Solberg Citroen's Petter Solberg on Thursday, as all three ran further down the starting order, while title rivals Loeb (Citroen) and Mikko Hirvonen (Ford) struggled to keep pace as they swept the dusty stages clear for those behind.

Sordo and Solberg both slowed on the final Thursday stage to try and get better positions for day two, leaving Latvala half a minute ahead of Citroen Junior's Sebastien Ogier and Loeb. Hirvonen was unable to benefit from his improved running order spot on Friday as he crashed out on the day's opening stage - but Loeb made the most of it and surged into a 27s lead by the end of the leg.

Citroen accidentally let Ogier get ahead of Latvala for second on the final stage, which would have given the Finn a good chance to chase Loeb down today, when the champion ran first on the road.

But Ogier was penalised for leaving the final day's first service late due to an electrical problem, while Ford asked Hirvonen - back under superally - to check in early so he would vault up the running order and could run ahead of Latvala. Ogier was then instructed to check in at the first stage even earlier - giving him eight minutes of penalties but ensuring he could sweep the road clean for Loeb.

With the running order now reading Ogier-Loeb-Hirvonen-Latvala, that meant Loeb avoided the worst of the stage conditions, and then made sure of victory with a superb performance this morning, taking a series of stage wins even though he was still second on the road.

Loeb's pace swiftly ended any hope Latvala had of challenging for the win, and the champion duly clinched victory by 35.8 seconds, extending his championship margin to 25 points over Latvala and 31 over Hirvonen, who was eventually classified 19th under superally - 46 minutes behind the leaders after his penalties.

Slowing on day one did not pay off for Solberg and Sordo, who thereafter had quiet runs to what became third and fourth, a long way clear of Stobart Ford's Matthew Wilson in fifth place.

Ogier's penalties this morning dropped him from second to eighth, but he fought back to sixth ahead of Federico Villagra (Munchi's Ford) and Kimi Raikkonen (Citroen Junior), as the latter enjoyed a virtually trouble-free rally and got some invaluable mileage. Henning Solberg was only ninth in the second Stobart car after a Friday puncture.