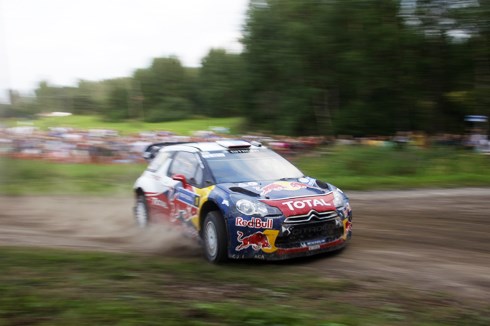 Sebastien Loeb has clinched the second Rally Finland victory of his career and stretched his points lead with a superb drive on the 2011 event.

The world champion spent the whole weekend battling with his Citroen team-mate Sebastien Ogier and Ford's Jari-Matti Latvala, but made a crucial break on the final morning.

All three used various tactics to try and ensure that they were not running first on the road on Saturday, with Loeb seeming to luck out and end up leading overnight.

Yet after all their efforts to avoid being first in the final day running order, Loeb found it no problem at all, at least on the opening stages, where he quickly opened up a 10-second lead, which he duly protected for the rest of the day. The result made Loeb the first non-Scandinavian ever to win the event twice.

"It feels very good. A very difficult race," he said. "We cleaned the road for three days and finally we were still the fastest in the end. We had to really fight until the end so it may be the greatest win."

A frustrated Ogier lost second to Latvala with a late puncture that forced him to drive carefully thereafter as he lacked further spare tyres. Latvala could not always match the Citroens, though as his set-up became increasingly to his liking, he was able to edge slightly closer to Loeb late on.

"I just woke up a little too late for the rally," Latvala admitted. "It's been a great really and I've really been enjoying it. Of course it's a little disappointing because I wanted to win and I couldn't get it."

His Ford team-mate Mikko Hirvonen was by far the fastest man for the most of the weekend. But an error on stage one that saw him damage his Fiesta against a tree left him two minutes off the road and in 36th on Thursday night.

That set the stage for a ferocious charge back through the order that eventually took him to fourth, just 1m09s off the lead, claiming the bonus points for the power stage win along the way.

Petter Solberg was a resigned fifth at the end of a weekend when he never had the pace to challenge for victory.

The Stobart Fords of Mads Ostberg, Henning Solberg and Matthew Wilson filled sixth to eighth places ahead of Kimi Raikkonen (Ice 1 Citroen) and S2000 winner Juho Hanninen, after the late retirement of both Minis due to overheating issues. Dani Sordo and Kris Meeke had earlier run comfortably in the top eight.

Ostberg pushed hard and kept Solberg under pressure to the finish, while Solberg, Wilson and Raikkonen were engaged in a very close dice throughout the event.

Local stars Jari Ketomaa and Matti Rantanen both starred early on in one-off outings in WRC machinery, with Ketomaa even leading briefly, but would crash out.