The reigning champions started his latest title defense on a perfect note at the season opener. 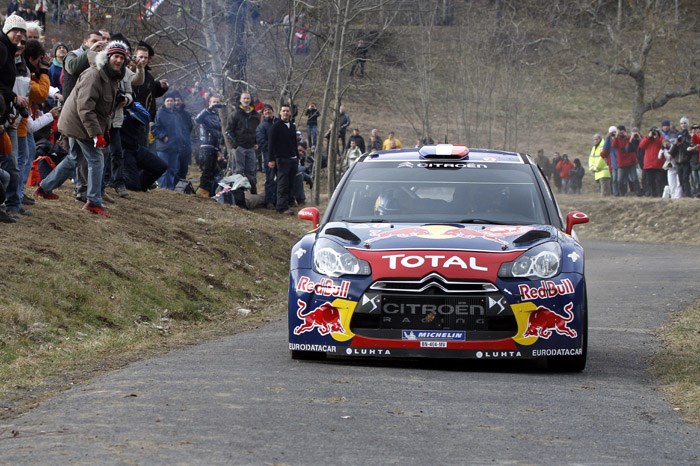 Sebastien Loeb started 2012 in the perfect fashion by clinching a dominant victory in the World Rally Championship's Monte Carlo opener.

The reigning champion looked like he might have a fight on his hands when likely title rival Jari-Matti Latvala used a brilliant tyre choice amid changeable weather on day one to shoot into a half-minute lead. But when Latvala rolled his Ford out of first place late on Wednesday, Loeb's Citroen was left alone at the front of the field, and he duly pulled away to claim a crushing sixth Monte Carlo win.

To complete an ideal start to his latest title defence, Loeb was also quickest on the power stage, giving him a maximum 28-point score for the event.

Mini's Dani Sordo, Ford's Petter Solberg and Citroen's Mikko Hirvonen battled for the podium all week. Second place looked an unlikely result for Sordo when he damaged his car's suspension on only the second stage, but he drove flawlessly thereafter to secure the runner-up spot - a much-needed podium for the troubled Mini programme.

Solberg was thrilled to take a maiden Monte podium on his return to Ford. The Norwegian was embroiled in an ultra-close battle with Sordo until getting his tyre choice wrong on Thursday, then mounted a spectacular charge to gain 50 seconds on the Mini in just four stages yesterday, though he ran out of time to really challenge to reclaim second.

After a tough start to his first rally with Citroen, Hirvonen took a string of stage wins on Friday and Saturday as he came back through from sixth to fourth place. A spin yesterday afternoon stymied what looked like it might become a shot at third place.

Evgeny Novikov produced one of his most impressive WRC performances yet to take fifth place in the best of M-Sport's second-string Fords, and also took third place behind Hirvonen on the power stage. The Russian's veteran returnee team-mate Francois Delecour shrugged off his long absence from the WRC to take sixth position, and then handed the wheel of his Ford to co-driver Dominique Savignoni for the power stage to allow his friend to round out his rallying career in style - Savignoni retiring from the sport after this event.

Latvala was one of several significant retirements. Ex-Citroen driver Sebastien Ogier excelled on his debut in a Volkswagen-run Skoda Fabia, getting the humble S2000 car as high as fourth overall as he took the fight to the World Rally Cars. But his giantkilling run ended in a massive crash when sixth at the end of day two, leaving co-driver Julien Ingrassia with minor arm injuries.

Possibly the most heartbreaking result was P-G Andersson's late retirement from ninth overall and the SWRC class lead when his Proton developed a fuel leak on Saturday night. Craig Breen was therefore the sole SWRC finisher, while Ogier's team-mate Kevin Abbring was highest-placed S2000 car. Last year's winner Bryan Bouffier lost a lot of time with incidents on day one. Bouffier's former Intercontinental Rally Challenge rival Thierry Neuville was running eighth - ahead of Delecour - when he crashed at the end of the opening leg.