The first race was a close fight between Lee, guest driver Gosia Rdest from Poland and Karthik Tharani. 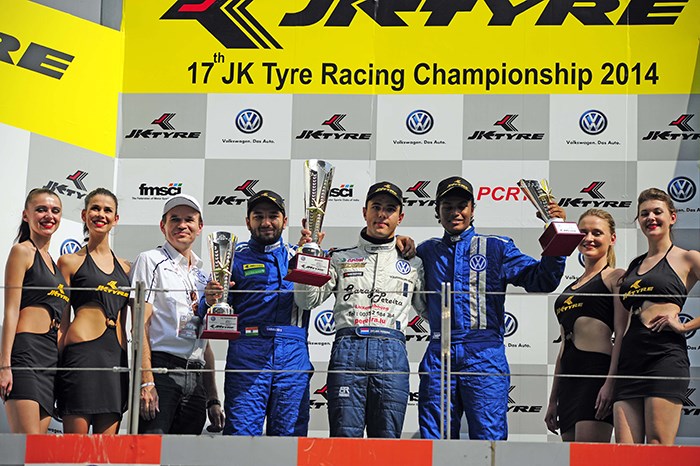 Delhi boy Lee Keshav and international guest racer Dylan Pereira from Luxembourg featured on top of the podium at Round 3 of the Volkswagen Polo R Cup India 2014 held at Buddh International Circuit.

On day one, Lee Keshav Gupta registered his first win of the season by winning both races after securing pole position earlier in the weekend. The first race was a close fight between Lee, guest driver Gosia Rdest from Poland and Karthik Tharani. However, pole-setter Lee was able to maintain the lead from the beginning to the chequered flag with clever, tactical driving throughout.

The second race was an exciting contest between Dylan Pereira, Angad Singh Matharoo and Lee Keshav. On fourth lap, an aggressive fight between Angad and guest driver Dylan Pereira resulted in him being disqualified. On sixth lap, Lee made a move on Angad to come to the top and carried on till the end to win the race. Karminder Singh drove steadily to finish on the final spot of the podium.

Commenting on the win, Lee Keshav said, “It is the best day of my life. I got pole position to begin with and registered my first win of the season. Race two was the icing on the cake with one more victory for the day. This puts me in a very strong position in the championship.”

With one more race to go on day, 17 year-old Dylan Pereira finally managed to secure the win that evaded him the previous day. Pereira got a great start and was running in the top three from the outset and took the lead position on lap seven. Then on, he held his position for the last two laps to seal the the top spot.

Behind Dylan, Karminder Pal Singh climbed up to the second spot with pole-setter Karthik Tharani eventually ending up third after a safety car restart.

Winner of Race 1 and 2, Lee Keshav was unfortunately out in the initial laps.

Commenting on the win, Dylan Pereira said, “India was an amazing experience and I am happy to have raced against such talented bunch of drivers here. I had gauged the level of competition yesterday and was determined to give in my best today. The idea was to be amongst top 3 and then make use of every possible opportunity. On the 7th lap, I got a chance to overtake Karthik and took the lead. I am very happy with my performance today and I take back home a lot of learning.”

Sirish Vissa, Head of Volkswagen Motorsport India said, “As expected, it  was full of action. Boys raced like seasoned drivers and displayed proficiency and maturity on the race track and put up a great show in front of thousands of spectators who turned up today. It has indeed been a great weekend and hope the crowd enjoyed watching races here. The stage has been set for an exciting final in December.”