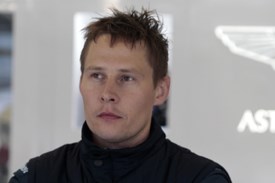 The Dane, who was 34 years old, and had started from pole in the GTE Am class, crashed heavily at Tertre Rouge early on, bringing out the safety car and causing significant damage to the barriers.

Simonsen, who was racing at Le Mans for the seventh time, was taken to the medical centre by ambulance, where he succumbed to his injuries.

A statement from Le Mans organiser the ACO read: "At 15h09 the #95 Aston Martin Vantage GTE, driven by Allan Simonsen of Denmark, exited the track at high-speed at the Tertre Rouge corner on his fourth lap of the race.

"The driver was immediately attended on the scene by the doctors from the Automobile Club de l'Ouest's Medical Service.

"In a serious condition, Allan Simonsen was transferred immediately to the circuit medical centre, where he died soon after.

The ACO will make no further statement until the exact reasons for the accident are determined.

Simonsen's death is the first Le Mans 24 Hours fatality since Sebastien Enjolras was killed in an accident during pre-qualifying in 1997, and the first during the race since Jo Gartner's death in 1986.