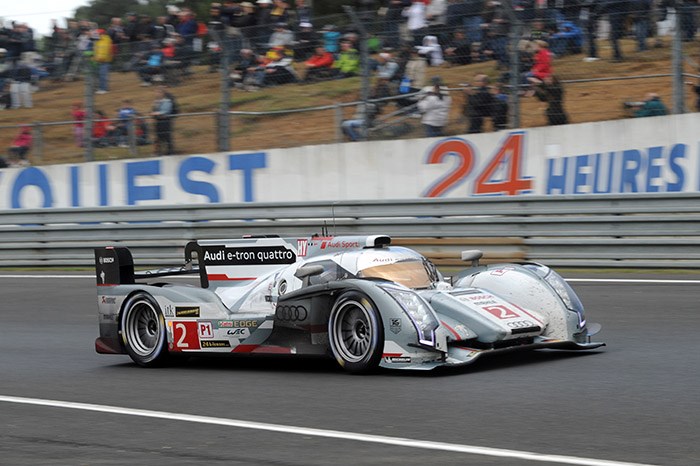 Tom Kristensen, Allan McNish and Loic Duval took a commanding victory in a Le Mans 24 Hours that was overshadowed by the death of Danish driver Allan Simonsen early in the race.

For Kristensen it was a ninth win in the race and extended the record he already held. McNish took his third Le Mans win while Duval, who put the car on pole last Wednesday, claimed success in the race for the first time.

Duval assumed the lead in the #2 R18 e-tron quattro in the seventh hour when the Benoit Treluyer/Andre Lotterer/Marcel Fassler #1 car, which had held the advantage from the start, spent 12 laps in the pits while an alternator problem was fixed.

A puncture sustained in traffic while Oliver Jarvis was at the wheel put the #3 Audi on the back foot at around the same time. The machine later needed further bodywork repairs that dropped it a further lap off the pace an hour later.

While the #1 car dropped outside the top 20 and the #3 fell to sixth, the Toyotas moved up to second and third.

Sebastien Buemi even had the audacity to get his #8 TS030 HYBRID back on the lead lap in the final half-hour to claim a well-deserved runner-up spot with Anthony Davidson and Stephane Sarrazin, but the #7 was not so lucky.

After losing third to Jarvis with four hours to go, Nicolas Lapierre crashed heavily at the Porsche curves, but amazingly managed to get his car back to the pits and repaired without dropping any more spots.

The Strakka HPD of Jonny Kane/Danny Watts/Nick Leventis finished sixth after the Rebellion Lola challenge was blunted by a safety car-inducing shunt for Andrea Belicchi on Sunday morning and gearbox problems for the #12 car that boasted Neel Jani and Nick Heidfeld on its line-up.

OAK Racing claimed a one-two finish in LMP2; Bertrand Baguette recovering from a spin in the final hour when heavy rain doused the circuit to take victory with Ricardo Gonzalez and Martin Plowman.

The G-Drive machine lost two laps - the margin it finished behind the winner - to a slow puncture early on and an unscheduled pitstop to change regulation lighting panels on the side of the car during the night.

For a large portion of the race the GTE Pro division looked likely to be dominated by an Aston Martin Racing squad still in mourning after news of Simonsen's death broke on Saturday evening.

A heavy crash from leader Frederic Makowiecki at the second Mulsanne chicane with five and a half hours to go handed the advantage to the sister Vantage GTE of Stefan Mucke/Darren Turner/Rob Bell.

But as the race moved along the #92 Manthey-run factory Porsche of Richard Lietz/Marc Lieb/Romain Dumas came into contention.

The late rain shower led to a range of strategies being adopted. Lietz stayed out on dry tyres when the weather was at its worst and was then able to use the fact that Mucke had been held in the pits by a red light to open up what would be a winning a four-minute advantage at a stroke.

With the sister #91 Porsche of Patrick Pilet/Jorg Bergmeister/Timo Bernhard also making a smart tyre call at this point the Aston was relegated to third.

Neither the factory Corvettes, nor the AF Corse Ferraris were ever in contention; Toni Vilander throwing away fifth in one of the Italian machines when he planted his in the tyres at Mulsanne corner when the rain came.

Aston also led the GTE Am division early on until polesitter Simonsen crashed fatally at Tertre Rouge on lap four; the Vantage GTE causing extensive damage to the crash barriers on the exit of the corner.

Marco Cioci and Matt Griffin picked up the baton and led first six hours in the #61 AF Corse Ferrari, but dropped down the order after co-driver Jack Gerber spun several times.

As the race developed and the #88 Proton and #77 Dempsey Del Piero Porsches suffered various maladies, the #76 Imsa 911 GT3 RSR of Jean-Karl Vernay/Raymond Narac/Christophe Bourret came to the fore.

A one-lap advantage was established with four hours to go, which proved enough to give the French trio victory ahead of the #55 AF Corse machine of Piergiuseppe Perazzini/Darryl O'Young/Lorenzo Case. The #61 car finished third.