Becomes the first Indian on the Formula 3 rostrum after Narain Karthikeyan. 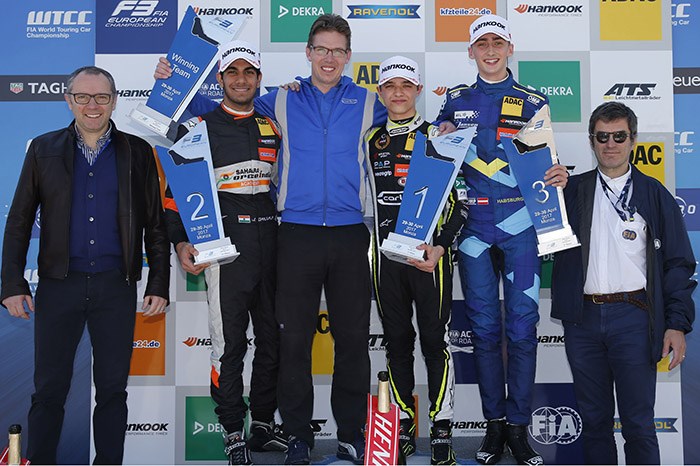 Following through on his dominant pole position at the temple of speed, Sahara Force India protégé Jehan Daruvala clinched his first podium in the FIA Formula 3 European Championship at Monza by finishing second – the first for an Indian driver in the highly competitive championship.

Prior to Daruvala’s achievement, the only Indian to secure pole position, wins and podiums at Formula 3 level was Narain Karthikeyan in the erstwhile British F3 – the leading junior championship at the time.

Jehan switched to Formula 3 this year following two challenging seasons in Formula Renault – where he competed in FR Alps, Northern European Cup (NEC) and Eurocup series. While there were flashes of outright speed, he was often unable to convert them into results. He finished 4th overall in the NEC – with one pole position and one win to his name.

Driving for Carlin Motorsport this year– incidentally the same team Karthikeyan drove for during his career, the 18-year old Indian seems to have found the right environment to deliver on his potential. At the Silverstone season opener, he qualified 5th overall and finished all races in points. With likes of Lando Norris, Callum Ilott, Jake Dennis, Mick Schumacher, Harrison Newey and Pedro Piquet – all boasting of fantastic pedigree and enviable records competing in the championship; a pole position and finishing on the podium in a straight fight in his second-ever F3 outing is indeed laudable.

The 2017 Formula 3 season is going to be a long one – with eight further rounds scheduled (each round has three races) followed by the de facto World Cup of Formula 3, Macau GP. Surely there will be plenty of opportunity for Jehan to showcase his talent and speed.