Kush’s overall performance also put him in 8th place in the final race despite a race penalty. 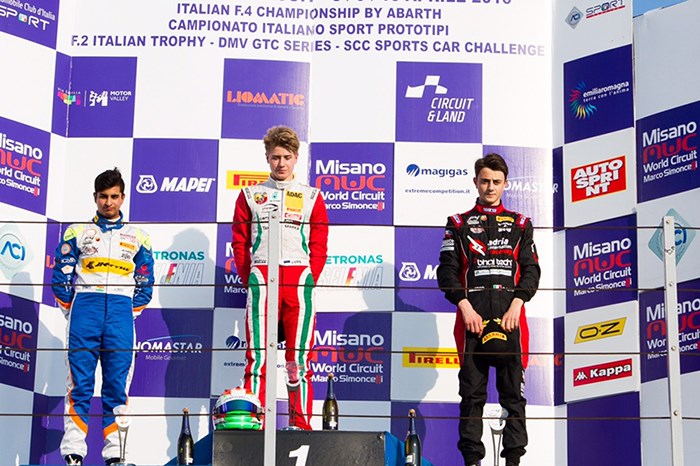 Kush Maini, India’s youngest race driver, put in an impressive drive in Round 1 of the Italian F4 Championship in Misano to secure a 2nd place on the rookie podium in the final race for the weekend. Kush’s overall performance also put him in 8th place in the final race despite a race penalty. He also finished his previous two races amongst the top 10, finishing 8th and 10th respectively, securing a total of 5 points.

With 41 participants in the championship, the format involves the drivers being split into three groups with two groups racing each other for the first three races. Kush in Group A raced the first and third race of the weekend and qualified 14th to be amongst the selected top 36 drivers who would race the final race of the weekend.

Finishing second amongst the rookie drivers and on the podium, Kush was ecstatic about his performance over the weekend. “It was a difficult qualifying session but our comeback in Races 1 and 3 were brilliant. We expected to perform in the final race as I was learning and improving with every Lap but to get a podium on my debut was the highlight of the weekend. The racing is so close and tightly fought which drives me to work harder to earn that podium place. It can only get better from this weekend onwards.”

A wet qualifying session and unfavourable conditions saw Kush start in 21st place for Race 1 on the grid but a series of quick overtaking moves saw him weave through the field and finish in 8thplace. This was a sign of things to come as the Indian continued to impress all with his overtaking tenacity as he started from the same position in Race 2 to finish 10th and 5th in the rookie standings.

Kush qualified for the final race starting 14th on the grid courtesy of two top 10 finishes in his first two races. More overtaking from the young driver was on the cards as he pushed to finish in 4th place, ahead of Mick Schumacher, the winner from the previous two races. A perfect ending to a successful weekend saw Kush secure a 2nd place on the rookie podium as well.

On the experience gained from his first time out racing in cars, Kush was optimistic about room for improvement. “I’m not the type of driver to rest on his laurels. We need to build on this promising start to the season and push forward. There is potential to go one step further and I’m excited about the possibilities that lay ahead.”

Kush will race next at the Adria track, in Northern Italy on the weekend of 6th May.