The former HRT F1 driver could even race in the full eight rounds of Auto GP in 2013. 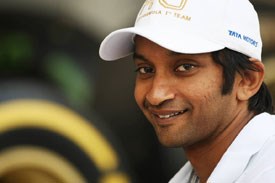 Autosport understands the former Jordan and HRT grand prix driver could expand his deal and race in the full eight rounds of this year's series.

Karthikeyan heads to this weekend's opening round at Monza without the benefit of testing the series' heavily revised cars. The 36-year-old does however have considerable experience of the Coloni-prepared machines' Lola A1GP car origins from 2006 and '07.

He will be paired with British reigning Formula 2 champion Luciano Bacheta.

Karthikeyan's move from Formula 1 to Auto GP is not without precedent.

Romain Grosjean was Auto GP's inaugural champion in 2010, following his release from the Renault F1 team at the conclusion of the preceding year.

More recently, former Jaguar and Williams grand prix driver Antonio Pizzonia made a raid on the series’ silverware on his single-seater comeback at Curitiba last year.