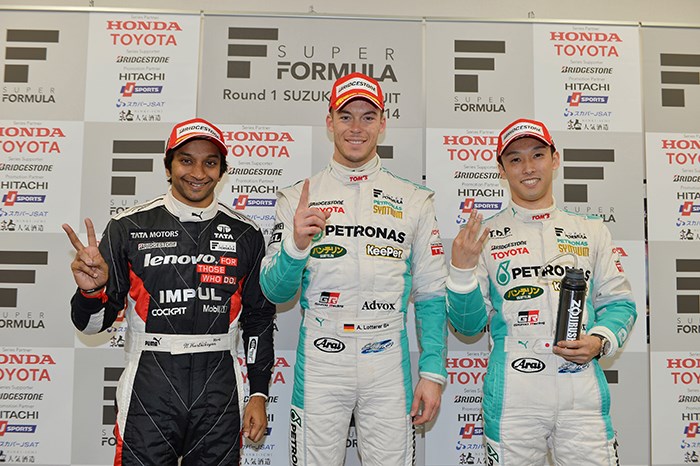 Narain Karthikeyan kicked off his 2014 Super Formula campaign on a strong note by qualifying second on the first race weekend of the season.

“It is incredible to qualify on the front row on the first weekend of the season, considering the competition. We managed to improve bit by bit over the weekend and hopefully will be in a good place for the race”, said Karthikeyan, who is supported by the Tata Group and Tata Motors.

Karthikeyan was consistently in the top five during the practice sessions and managed to make a considerable step forward in qualifying to get closer to the front-running Tom’s Toyota factory team.

“The Tom’s drivers (Lotterer and Nakajima) have been in a class of their own throughout the weekend so splitting them is incredibly satisfying. Just four-tenths cover the top five so it very close at the front”, the Indian remarked.

The first race of the season is set to be a step into the unknown, considering the drivers will have contend with a new launch system, with clutch on the steering (like Formula 1) – fuel loads and tyre degradation being other critical factors.

“The car is amazing, great to drive and it will be a long race with pitstops for fuel and tyres, so quite a bit of strategy is involved. We hope that everything goes to plan and come away with a strong result on the first weekend of the season”