Karthik was fastest in all the practice sessions before qualifying on pole position with a lap of 1:41.886. 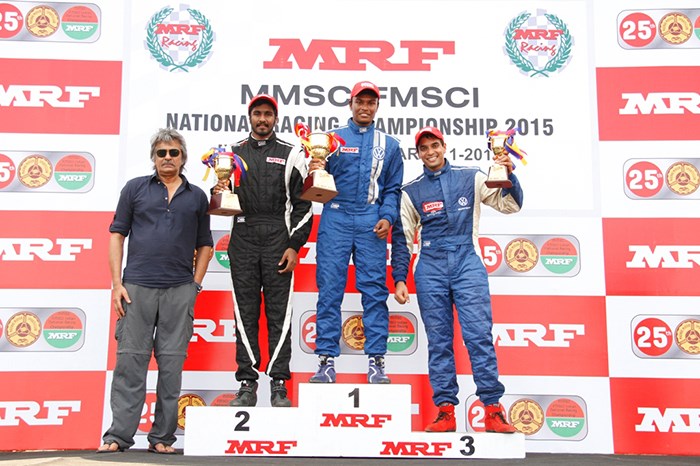 Karthik Tharani Singh was in supreme form as he dominated proceedings at Round 2 of the MMSC-FMSCI Indian National Racing Championship in the MRF FF1600 Championship. Karthik had the perfect weekend which included topping both practice sessions, qualifying on pole position, winning both races and also setting the fastest lap.

Karthik was fastest in all the practice sessions before qualifying on pole position with a lap of 1:41.886 and became the only driver to dip into the 41s all weekend. Behind him the battle was even closer with Arjun Narendran, Goutham Parekh and Siddharth Trivellore all separated by less than two tenths of a second in practice.

In Race 1, Karthik had a good start to lead into the first corner. Behind him Narendran held off Parekh and Trivellore to keep second. Karthik pulled away from the pack as Narendran and Parekh got into a fierce battle. A mistake by Narendran helped Parekh get a run on him and pass him on the straight heading into Anands corner. Karthik took the chequered flag comfortably to win his first race of the season. Parekh finished in second place with Narendran in third.

In Race 2, Trivellore started on reverse grid pole alongside Narendran. He went into the lead with Narendran, Karthik and Parekh behind him. It was a thrilling battle for 6 laps with the top 4 being separated by 1.5 seconds. On lap 7 Narendran tried a move on Trivellore, sending both drivers wide. Karthik took the opportunity to pounce into the lead and pull away for another emphatic win. Behind him Narendran finished in second place with Trivellore getting his first podium of the season after finishing third.

Karthik Tharani Singh was jubilant after having his best ever racing weekend. He commented, “It feels just fantastic to top all sessions in a race weekend. This is the first time I have done this in my single seater career. A big thank you to MRF for giving me such a great car. I have improved a lot over the year and feel I was driving really well. It was a very strategic race and I am happy that it has worked in my favour.”

Arjun Narendran was satisfied with two podium finishes this weekend. He commented, "Karthik has been quick all weekend so am happy to get two podium finishes. Both races were really close and involved some great racing. Siddharth (Trivellore) and I were having a great race but unfortunately we both ran wide letting Karthik through. The Championship is really close so look forward to the break before the next round."

Karthik Tharani Singh has taken the lead in the Championship and sits on top with 80 points. Goutham parekh lies in 2nd place with 73 points with Arjun Narendran in 3rd place with 70 points.