A lot was anticipated from the final round of the Gulf Cup - Clash of the Titans held at Govindpura, Bhopal, and none of the riders disappointed. 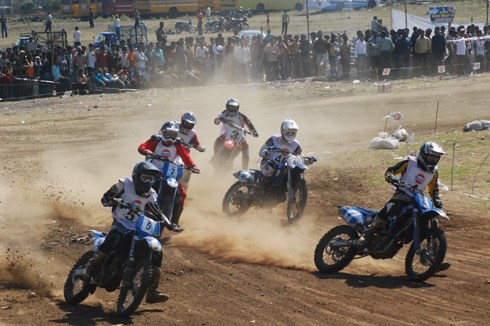 A lot was anticipated from the final round of the Gulf Cup - Clash of the Titans held at Govindpura, Bhopal, and none of the riders disappointed as they took off to a flying start at the specially-laid out track – a mixture of sharp bends, loose gravel and water-logged areas. Bhopal’s Mujaffar Ali and Bangalore’s Pramod Joshua came up with a brilliant display, emerging as the undisputed kings of dirt-track motorcycle racing in India. In the previous rounds at Jaipur, Hyderabad and Nashik, Pramod Joshua, H K Pradeep and Mujaffar Ali had proven themselves to be a distinct class above the field, which featured only the top riders from the previous rounds in the final leg at Bhopal. Like in all the previous rounds, the Bangalore rider, astride a TVS, was a clear winner in the Indian Expert class Group A for foreign motorcycles despite being challenged all the way by Pradeep and R Nataraj, who finished second and third respectively. Joshua was under constant pressure as he went through the motions on the serpentine course. To his credit, he did well to strike a good balance on the sharp bends and stay ahead of the rest of the field to come out trumps. The second outing in the Indian Expert Class Group B was a tough affair for Joshua. Sudeep Kotegar tailed him right through but had to be content with being the second best. Vishal Barguje finished third. It wasn’t all just about the experienced riders, though. Young novice Murthy R was equally impressive, winning the Novice championship for bikes upto 165cc two-stroke and upto 130cc. Maninder Singh took victory in the Private Expert class for foreign motorcycles upto 260cc two- and four-stroke, beating back a strong challenge from Vineeth Kurup and Jatin Jain, who finished second and third respectively. In the Private Expert class Group B upto 260cc two- and four-stroke, Mujaffar Ali came out victorious, with Firoz Khan and Jes David finishing second and third respectively. Mujaffar Ali displayed his brilliance by winning all the four races he participated in, thus winning the maximum number of races in the event. He has certainly proved himself in the National motorsport scenario and will be the one to watch out for in events to follow.