TVS rider Pramod Joshua was all guns blazing on his way to a deserving victory in premier events at the third round of Gulf Cup Dirt Track Racing held in Nashik. 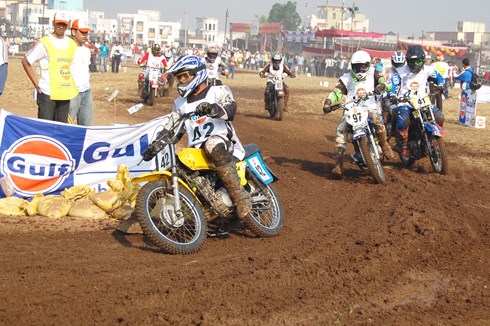 TVS rider Pramod Joshua was all guns blazing on his way to a deserving victory in premier events at the third round of Gulf Cup Dirt Track Racing held in Nashik. The 28-year-old Bangalore rider continued his awe-inspiring display of motorcycle control, akin to his previous two rounds, and left no stone unturned to ensure TVS’ domination by sweeping the Indian Expert Group A class, which allows foreign motorcycles upto 260cc, and the Indian Expert Group B class. In the private expert class, it was Coimbatore rider R Prakash who stole top honours in the foreign motorcycles upto-260cc category. Delhi rider Maninder Singh and Pune’s Fabio Chindy were being touted favourites for the top spot before the event. However, Prakash defied a strong challenge from both riders and went on to win three of the four races in the category, leaving Maninder and Fabio to settle for second and third places respectively. The remaining race in the class was won by Bhopal’s Muzaffar Ali. The course was laid out with no mercy whatsoever shown to the riders and machines. It consisted of sharp bends peppered with loose gravel, and water crossings thrown in for good measure. To begin with, Joshua was given a tough time, as witnessed in the past, by his Bangalore team-mates R Natraj and H K Pradeep of TVS Racing. However, he managed to keep his head on his shoulders and soon shook away the duo, taking the chequered flag first. The novice class saw local boy Shashank Shewale giving home fans a lot to cheer about as he challenged Coimbatore’s A Anand in the 165cc category. But Anand proved a tough nut to crack, and crossed the finish line ahead of Shewale. Mumbai’s Kshitij Shukla took the last podium spot. R Murthy won the other two races in the novice 130cc four-stroke class, finishing ahead of Syed Hidayath, also from Bangalore. Mumbai’s Kannan Naidu finished third. Mohan Pawar won the college class for Nashik riders for bikes upto 165cc, while Samir Bharve and Gaurav Deshpande finished second and third respectively.