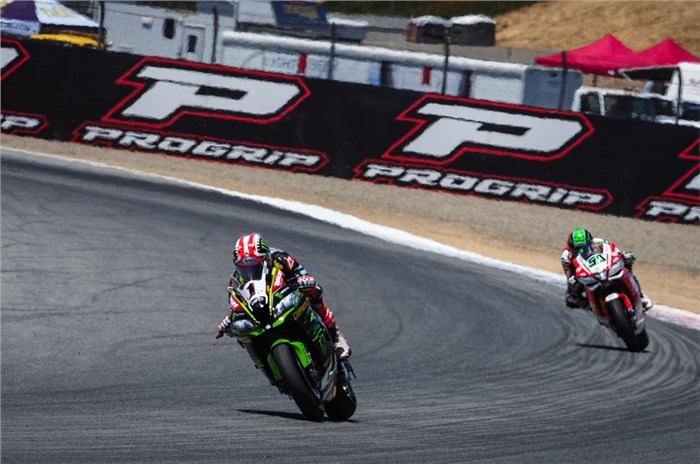 Unlike most other sports, in motor racing, your teammate is your first opponent - the one rival using the same equipment as you. If you’re beaten by your teammate, you have nobody to lay blame on but yourself. The Kawasaki Racing Team is only too aware of this.

With world champions occupying either side of the KRT pit-box, there has always been tension within, even though cordiality has been maintained on the surface. With both riders fighting to achieve a common goal, this is inevitable.

All of this tension boiled over in Brno, with both riders blaming each other for an incident that involved contact between the two, leading to a DNF for Rea. Coming into this weekend’s race at Laguna Seca, Rea was determined to avenge his Czech misfortune and stamp his authority over the class once again.

Ducati’s Chaz Davies started Saturday’s race from pole position and got the holeshot into turn one. Behind him, Jonathan Rea got past teammate Tom Sykes to secure second place and immediately began hounding Davies for the lead. He made his first overtaking attempt at the final corner on lap one but ran slightly wide, allowing Davies to keep the lead.

Over the next five laps, the pair rode around line astern, before Rea eventually got past at the corkscrew on lap seven and went on to take the win by three seconds. Sykes suffered a long (and unfortunately familiar) slide down the order to eventually finish in seventh place, more than 25 seconds behind his teammate.

Alex Lowes’ third place finish meant that the UK riders made a clean sweep of the podium. He was followed by Aprilia rider Eugene Laverty, and the Ducatis of Marco Melandri and Xavi Fores.

Jake Gagne was the highest American finisher, securing a respectable 10th place in his first full season aboard a relatively uncompetitive Honda. His two compatriots, Yamaha-mounted Josh Herrin and Honda rider PJ Jacobsen, were both retirees. Jacobsen was punted off track by Kawasaki rider Leandro Mercado, only for Mercado to himself crash a few corners later.

Race 2 saw Irishman Eugene Laverty start from pole position, courtesy of WSBK’s controversial reverse grid system. The Aprilia rider capitalised and found himself leading the pack into the Andretti hairpin, followed closely by Melandri and Michael van der Mark. Further down the grid, Rea wasted no time in beginning his charge through the pack, gaining three places at the start, to slot into sixth position behind his teammate.

By the time the field came around to start lap two, the Kawasakis had swapped positions, and Laverty had eeked out a seven-tenth advantage over Melandri. Melandri himself was being relentlessly badgered by van der Mark and eventually succumbed to the pressure, running wide at turn 10 and allowing the Dutchman through.

Rea came through the field to take the lead on lap eight and cruised home to a five second victory. His victory was over Chaz Davies, who was able to climb up to second place with nine laps to go, but was unable to challenge Rea. Laverty held on to third place and behind him, the Yamaha teammates engaged in an intra-team battle, with Lowes eventually coming out on top.

Xavi Fores was the second-best Ducati in sixth place, with Melandri crashing out on lap five. Jake Gagne did better than in race one and secured ninth position on Sunday. This time around, Josh Herrin managed to finish the race, bringing up the tail of the field. It was an action-packed weekend for Herrin, with the local rider managing a wildcard WSBK appearance alongside his routine AMA Superbike duties. Riding in his national championship, he took a second place in race one, before suffering a DNF in race two. Jacobsen crashed out once again on Sunday.

Rea’s dominant double victory now puts him 75 points clear of nearest competitor Chaz Davies, and with only five rounds left to go, the Northern Irishman has one hand on the trophy. The paddock assembles again in just under two weeks’ time for the next round at Misano in Italy. This will be the last round before the summer break and everyone will be looking to carry positive momentum into the holidays.