As championship winners in the X-30 class’ Senior and Junior categories, Nirmal Umashankar and Ruhaan Alva will represent India in the X-30 world finals. 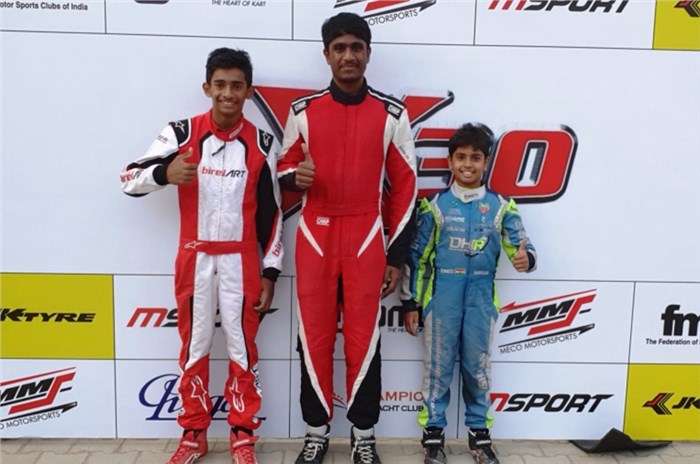 The final round of the 2019 JK Tyre-FMSCI National Karting Championship’s X-30 class was held at the Meco Kartopia track in Bengaluru, and after five rounds, Chennai's Nirmal Umashankar and Bengaluru's Ruhaan Alva emerged victorious, clinching the title in the Senior and Junior categories, respectively.

Umashankar remained in firm control at the top of the standings from the very beginning of the championship. After moving into the lead at the end of Round 1, Umashankar – who was previously a regular in the now defunct Euro JK class of the JK Tyre National Racing Championship – consolidated that lead in the next three rounds and by the end of Round 4, he held a formidable lead of 56 points. He scored a total of 23 points in the final round to take his tally of points up to 160 and win the championship in the Senior category. Aditya Swaminathan took 2nd place overall, with a total of 101 points, followed by Debarun Banerjee in 3rd place with 81 points.

The Junior category saw Alva seal championship victory after the first race of the weekend itself. He’d moved into the lead after the previous round and scored an additional 34 points in the final round of races to win with a lead of 30 points. Arjun S Nair and Ryan Mohammed finished 2nd and 3rd, respectively, overall in the Junior category.

Meanwhile, Bengaluru's Ishaan Madhesh clinched the title in the Cadet category, having dominated the championship from the very beginning. He ended up winning by a margin of 55 points from Shriya Lohia. Sai Shiva Makesh Sankaran took 3rd place overall with 117 points.

The X-30 class of the JK Tyre-FMSCI National Karting Championship saw participants compete in karts powered by 125cc, two-stroke IAME X30 engines. As winners in their respective categories, both Umashankar and Alva will now go on to participate in the X-30 world finals later this year.