The result was the first time Johnson had finished in the top 25 in the Daytona 500 since his 2006 win. 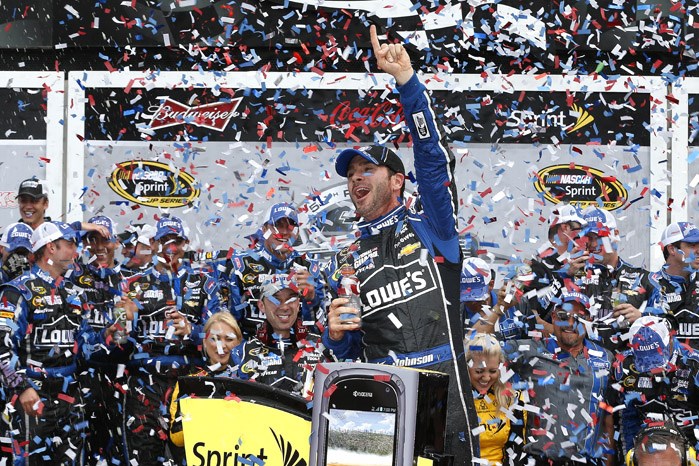 Johnson was a factor near the front throughout a largely processional event, battling side by side with reigning champion Brad Keselowski's Penske Ford going into the closing stages.

Despite predictions that she would swiftly fall back from pole position, Patrick spent much of the race in the top three, becoming the first woman to lead the Daytona 500 along the way.

But on the final lap Patrick and Biffle were both caught out when Earnhardt and Michael Waltrip Racing's Mark Martin came surging down the inside line.

Johnson had just enough of an edge to beat his team-mate by 0.129 seconds, with Earnhardt and Martin completing the top three ahead of Keselowski.

The result was the first time Johnson had finished in the top 25 in the Daytona 500 since his 2006 win.

Keselowski's Penske Ford sustained its damage in the two major pile-ups of the first three quarters of the race.

Duel winner Kevin Harvick and three-time champion Tony Stewart were both eliminated in the race's first multi-car crash, collected in a chain reaction after Kyle Busch tapped Kasey Kahne into a spin on lap 33.

Keselowski had a minor role in that tangle, then starred in the second on lap 13, when a touch from Trevor Bayne sent him bouncing over the grass.

While the champion managed to rejoin, 2011 Daytona winner Bayne spun and took out a host of drivers including Carl Edwards and rookie Austin Dillon, who had earlier been a top-three factor.

Toyota filled the top six places heading towards the final stint, only for a string of engine failures to strike its top teams. Matt Kenseth led the most laps on his debut for Joe Gibbs Racing, but had to park just before the same fate befell team-mate Busch.

Clint Bowyer and Denny Hamlin finished 11th and 14th having earlier fought for the lead.

Jeff Gordon got around front row partner Patrick to lead at the start and stayed there until the first pitstops.

But he dropped back thereafter as he had to nurse an overheating Chevrolet, and was only 20th at the flag.