Jehan’s brilliant lights to flag feat makes him the first and only Indian to win a Grand Prix in motorsport. 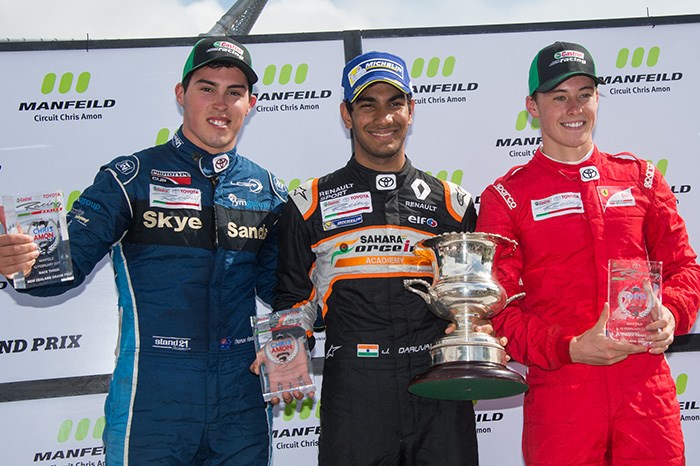 Sahara Force India Academy Racer, Jehan Daruvala registered the first Grand Prix victory for 2017 when he won the New Zealand Grand Prix in style at the Chris Amon Circuit in Manfeild, New Zealand. Jehan’s brilliant lights to flag feat makes him the first and only Indian to win a Grand Prix in motorsport. Keke Rosberg, Sir Jackie Stewart, Sir Jack Brabham, Sir Stirling Moss, John Surtees, Bruce McLaren are some of the illustrious past winner of this Grand Prix.

Earlier in the weekend of the Toyota Racing Series, Jehan bagged pole position for Race 1 and the New Zealand GP as well. The extremely close qualifying sessions saw 4 racers within two tenths of a second in each session. Jehan lapped the 3 km circuit to bag pole in race 1, just seven hundredths of a second in front of former Brazilian World F1 Champion’s son, Pedro Piquet. Ferrari Academy Racer Marcus Armstrong of New Zealand was a further eight hundredths of a second adrift. The top two remained the same for the New Zealand GP, while Thomas Randle bagged third.

Jehan started well from pole for race 1, but relinquished his position to Piquet, after having to brake on the dirty side the circuit into turn one. Piquet held his lead which remained for the entire race. Jehan followed him home with another second place, ahead of Marcus Armstrong.

The result meant that Jehan had to start third due to the reverse grid regulations for race 2. Jehan lost a position and eventually finished in seventh after damage to his car after contact from another driver.

The New Zealand Grand Prix was the main feature race and the third race of the weekend. This Grand Prix is the only other ‘Grand Prix’ besides the Macau GP, in motorsport, outside of Formula 1 and therefore very prestigious for all racers. Jehan had a good start from pole and went on to open up a lead while the racers behind him fought for position. Jehan was able to stay ahead of the pack while continuing to make no mistakes up in front. An incident then brought out the red flag, but Jehan kept up his rhythm by getting a good re start and leading once again. The 35 lap long race was the longest of the season and towards the end of the race Marcus Armstrong pulled closer to Jehan. Jehan was able to keep his cool and won the Grand Prix with a margin of less than a second ahead of Armstrong. Thomas Randle was less than half a second further behind in third.

Jehan’s brilliant lights to flag Grand Prix victory, is in addition to his 9 podiums in the Toyota Racing Series. Jehan’s tally meant that he had the most number of podiums and also the most number of pole positions in the 2017 series. Unfortunately a few incidents contributed heavily to his loss of points in the middle of the series and Jehan ultimately finished fifth overall.

“I am happy with the pace I have had throughout the series. Winning the Grand Prix is absolutely fantastic and is a proud moment in my racing career so far. I am thankful for everyone around who has helped me achieve this. I am completely focused on what lies ahead and I am confident of a good first year in Formula 3. I will be continuing to work hard with testing and fitness as well” said the Indian teenager.

Jehan will now graduate to the ultra-competitive FIA F3 European Championship where some of the world’s best Formula 1 stars have graduated from. Numerous racers from the previous years will be competing in their second or third seasons, ensuring that Jehan will have a lot to learn in his rookie season. The Sahara Force India Academy racer has however shown, he is comfortable with the higher powered car in early testing with competitive times in testing.