The Sahara Force India Academy driver dominated the final weekend of the season to seal the championship in style. 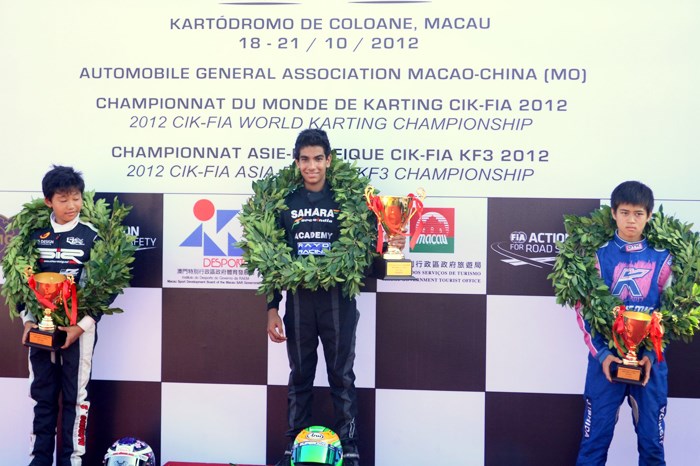 On Saturday, the 14-year old from Mumbai secured a closely-fought pole position and followed it up with wins in three qualifying heats and the pre-final.

Having started on pole for the final, the win didn't come easy for the Rayo Racing driver as he dropped to third after the second corner but managed to recover a place by the end of the the opening lap. It took him another seven laps to cover the half second gap from the leading Japanese, with the duo trading continous fastest laps thereafter.

Eventually on lap 17 – Jehan made his move into turn two but Sato came right back and grabbed the lead once again. The Indian waited for another lap before making his move again and this time managed to cover his line well into turn four and leaving the Japanese with nowhere to go.

On the penultimate lap, Sato made a lunge down the inside of turn four with saw both drivers slide off the track after minor contact. Then Sato covered his line well into the turn four on the final lap, but compromised his exit and Jehan reacted immediately and sent down a brilliant move down the inside at turn five to claim the victory and the championship.

“This is my biggest victory so far. It feels good to have proved myself at one of the biggest events in World Karting", said Jehan.

"Everyone at the Sahara Force India Academy has been instrumental in my performance. I would also like to thank Team Rayo Racing for their effort this weekend."