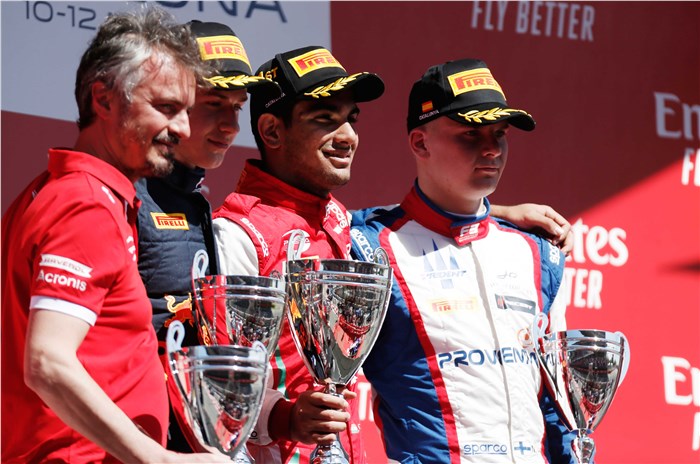 Daruvala now stands 3rd overall in the FIA F3 championship, with 23 points after Round 1.

Jehan Daruvala has kicked off the 2019 FIA Formula 3 (F3) season on a high note, winning an eventful Race 2 at the Circuit de Barcelona-Catalunya.

Starting the race from 2nd place, Daruvala made a good start and passed polesitter Niko Kari off the line to move into the lead. The safety car was soon deployed after Ye Yifei and Artem Petrovmade contact at Turn 1, taking out Raoul Hyman and Jake Hughes in the process. The race resumed after all four cars were cleared, however, just as Daruvala starting building a lead out at front, the safety car was deployed once again on lap 9 because Simo Laaksonen was sent spinning into the wall by Campos Racing’s Alex Peroni.

This bunched the grid together, essentially wiping out Daruvala’s 7.4sec lead. Nevertheless, he pulled off a strong re-start and quickly started pulling away from Kari, eventually taking victory by 2.1sec. Juri Vips closed in on Kari and passed him on lap 21 to take 2nd place.

Daruvala’s Race 2 win gives his team, Prema Racing, its second consecutive race win at the opening round of the 2019 FIA F3 championship – his teammate Robert Shwartzman won Race 1. Daruvala himself faced a difficult Race 1 as he dropped back at the start due to a clutch issue, but he held on to finish the race in 7th place.

After Round 1, Daruvala is now 3rd in the overall standings with 23 points, which is just one point behind Christian Lundgaard and 14 points behind championship leader Shwartzman. Daruvala moved to the new series – whichreplaces what used to be the GP3 series on Formula 1’s support bill– this year, after spending two seasons racing inthe Formula 3 European Championship.