Jehan can be a top-class F1 driver: Mallya

The 15-year old Mumbai lad is a part of the Sahara Force India academy, winning the Asian and British karting titles in the last two years. 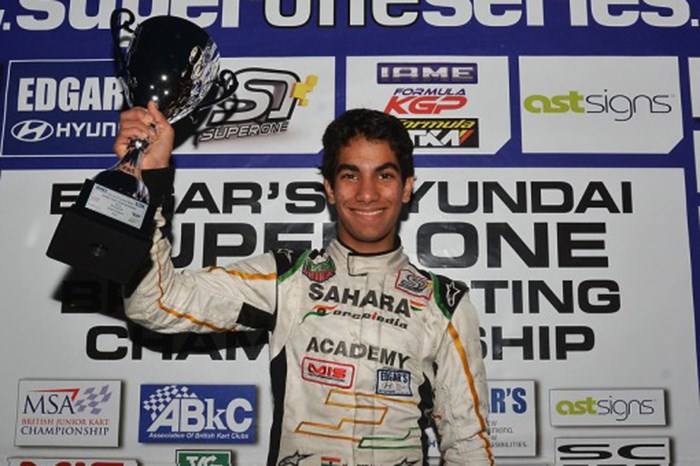 Sahara Force India team principal Vijay Mallya has iterated that the team’s young prodigy Jehan Daruvala has the potential to be on the Formula 1 grid in due time.

The 15-year old Mumbai lad is a part of the Sahara Force India academy after he topped the 'One in a billion’ hunt in 2011. He went on to win the Asian KF3 karting championship last year and followed it up by winning the ultra-competitive MSA British KF3 karting title earlier this year.

“Ever since I put an Indian team on the F1 grid, I have been constantly bombarded with questions on when we would have an Indian driver in the cockpit of our car”, said Mallya.

“I said three years ago that we would find a driver who has potential to be a top-class F1 driver in our country, that no one was readily available and that it was a process of not just identifying but also a process of learning”, he continued.

Prior to joining the Sahara Force India academy, Jehan had participated in the JK Rotax Max national karting championship in India – winning the Micro Max title in 2010.

“I am filled with both joy and pride today to say that we have found an Indian who we all can be very proud of and who certainly has the talent and all the makings of being a top class F1 driver in due time”, commented Mallya on Jehan’s progress so far.

“He still has a long way to go, but he’s going in the right direction, we need to nurture him and give him the right experience and hopefully one day we’ll welcome him to the cockpit of a Sahara Force India F1 car”, he continued.

According to sources, the current plan for Jehan involves two further years of karting in the senior category, followed by a single-seater switch to the Formula Renault 2.0. Another couple of years later, graduation to GP3 and GP2 championships will follow, depending on his progress and the amount of time he takes acclimatising to each step on the F1 ladder.

Although Red Bull has recently promoted its 19-year old prodigy Daniil Kvyat straight from GP3 into a Toro Rosso F1 seat for next year, only time will tell if it was the right call. But given that Jehan got exposed to competitive karting much later than his European peers, he should probably take his time in making his way up.

Popular belief is that F1 drivers should have at least three full seasons of high-level car racing under their belt and while drivers like Button and Raikkonen have been exceptions – they made the switch at a time when testing was unrestricted in Formula 1.

At 15 years of age, Jehan has plenty of time to do it right and there is no need to take two steps at a time just yet.