Hamilton outpaced team-mate and 2014 F1 title rival Nico Rosberg by 0.240 seconds in the second session on the faster medium tyres. 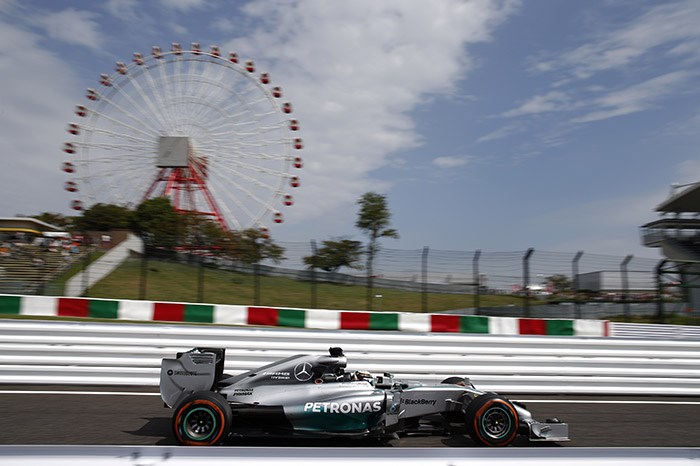 Lewis Hamilton set the pace in a crash-strewn second Formula 1 free practice session ahead of the Japanese Grand Prix at Suzuka.

The Mercedes driver outpaced team-mate and 2014 F1 title rival Nico Rosberg by 0.240 seconds when both went for quick runs on the faster medium-compound Pirellis shortly after the halfway mark of the 90-minute session.

Best of the rest was Williams driver Valtteri Bottas, who was 1.201s slower than Hamilton, with McLaren driver and 2011 Japanese GP winner Jenson Button fourth quickest.

Sebastian Vettel was the fastest of the two Red Bulls, just under 1.4s slower than Hamilton, although team-mate Daniel Ricciardo was down in 10th after his session came to a premature end.

The Australian had set the pace early on before a crash at the final right-hand kink led to him hitting the wall head-on.

His Red Bull suffered significant front-left damage and was initially dragged up the hill towards the chicane by the recovery crew.

But after it was left near the chicane, the red flags were deployed to allow it to be cleared up properly, with the delay lasting eight minutes.

Ahead of Ricciardo, Kimi Raikkonen was the faster of the Ferrari drivers, less than a tenth quicker than Fernando Alonso in seventh pace.

Kevin Magnussen, who had a wide moment at Spoon Curve and tore up some artificial grass, and Daniil Kvyat separated the Ferraris from Ricciardo.

Another driver who hit trouble during the session, Jean-Eric Vergne, was 11th fastest.

The Frenchman had sat out the morning session to allow Max Verstappen to make his F1 weekend debut, with the Dutchman suffering an engine failure in the closing minutes of practice one.

Vergne was slightly late joining second practice and then stopped on track before he could set a time.

He was able to return to action later in the session and ended up classified ahead of Nico Hulkenberg's Force India in 11th.

But the Frenchman had a second problem with four minutes remaining, coming to a halt on the run out of Spoon Curve and triggering a second red flag that brought practice to a premature end.

Romain Grosjean was 13th in the stronger of the two Lotus-Renaults ahead of the second Williams of Felipe Massa, the Brazilian unable to set a competitive fast lap to join Bottas near the front as red flag timings and understeer hampered him.

Sauber had a difficult session, with Adrian Sutil 17th fastest and Esteban Gutierrez just behind him despite crashing.

This happened four minutes after the restart following the red flag, when Gutierrez lost it entering Spoon Curve while on what was set to be his fastest lap of the session.

Kamui Kobayashi ended the session slowest of those who completed a flying lap after crashing on his fourth lap of the session.

The rear-end of his Caterham stepped out at Turn 4, and in attempting to correct, the car spun the other way and he backed into the barrier.

Spots of rain late in the session meant that several drivers had brief moments in the closing stages, with Raikkonen and Hulkenberg both having minor offs and Rosberg suffering a big lock up at the hairpin while on a long run.