Round 5 of the MRF NMRC saw him win, with Rajiv Sethu and Mathana Kumar coming a close 2nd and 3rd, overall. 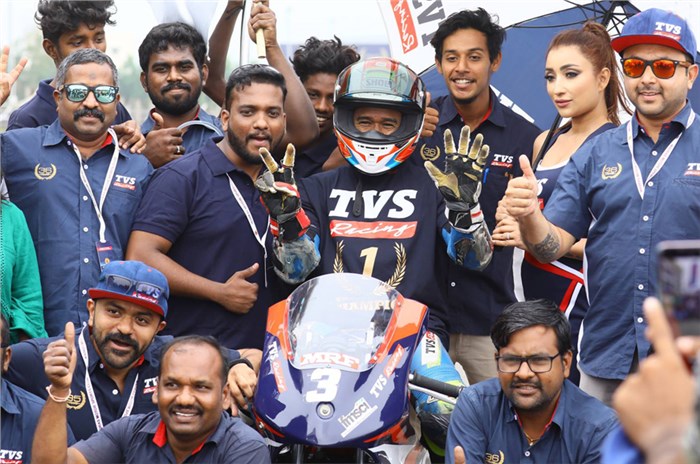 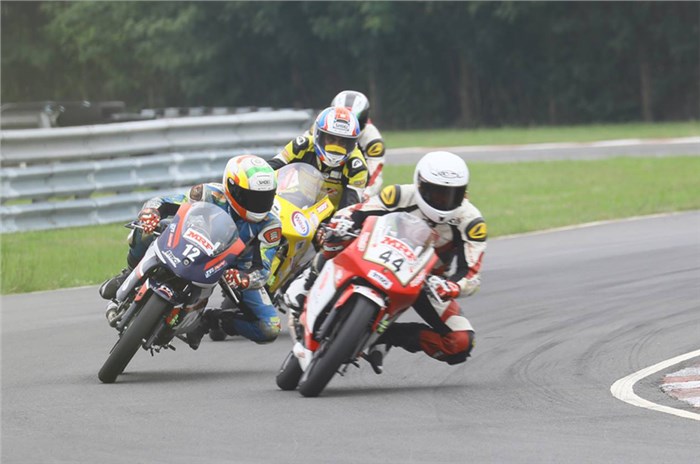 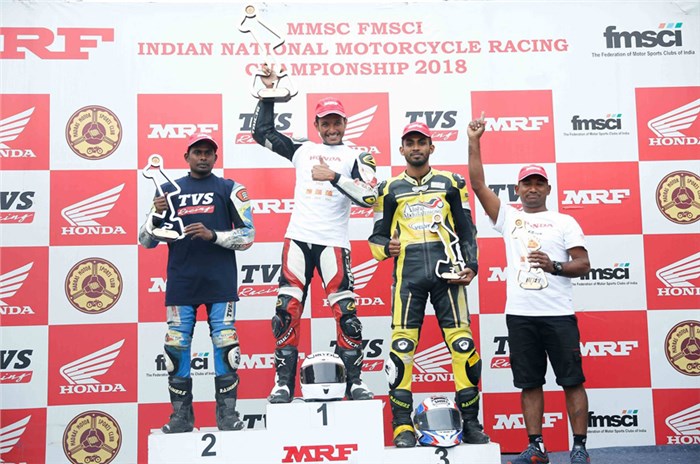 The fifth and final round of the 2018 MRF Indian National Motorcycle Racing Championship took place over the weekend of December 15-16, 2018. The season consisted of multiple categories, some open to novice riders and the more prestigious ones involving factory-sponsored teams and highly experienced racers. All these championships were decided this weekend and we’ve got the exhaustive report for you below.

SUPER SPORT 165cc:
One of the most prestigious classes is the Super Sport 165cc. For an incredible seventh time in a row, the championship was sealed by the TVS factory racer, Jagan Kumar. Jagan didn’t have a great start to the weekend, having crashed into his teammate KY Ahmed in Race 1. Despite not being in top shape for the next day’s race due to a painful wrist, he managed to finish 6th, claiming 8 points, which were enough to see him seal the title.

Race 1 of the weekend saw Deepak Ravikumar of TVS Racing achieve his first win in the Super Sport 165cc class after championship leader and teammates Jagan and Ahmed crashed out in lap 3.

Rajiv Sethu (Honda Ten10 Racing) took the win in Race 2 on Sunday with a total time of 15:41.626s (8 laps), finishing ahead of teammates Sarath Kumar, and Mathana Kumar. Despite the win, Rajiv finished 2nd in the championship.

The second race was won by Rahil (15:29.004) and Prabhu (15:29.197) finishing behind him. Sathyanarayana took the 3rd spot on the podium but it was enough for him to win the championship.

PRO-STOCK 165CC:
Anish Shetty won the Pro-Stock 165cc championship. Anish won the first race on Saturday and sealed the championship with a race to spare. Anup Kumar placed 2nd and Kannan Subramaniam finished behind him.

Race 2 saw the same faces on the podium with Anish on the top step, and Kannan and Anup swapping places.

STOCK 165CC:
In the five-lap race on Saturday, Varun Sobhan of Speed Up Racing finished on top with a time of 10:55.058. Private entrant Anand Rajendran finished a very close 2nd, clocking a total of 10:55.086. Venkatesan grabbed the final spot on the podium.

Karthik Mateti had a great overall season and finished on top on Sunday, with Venkatesan and Anand Rajendran behind him.

In a tight race on Sunday, Anish and Abhishek traded places, with Anish finally taking the top spot. Aravind finished in 3rd again. Ultimately, the performance was enough for Abhishek to take the championship

CBR 150:
The CBR 150 championship had 3 races over the weekend. Mohamed Mikail took top honours in all three and clinched the championship with a huge margin over his nearest rival.

TVS One-Make Ladies Championship :
The two five-lap races over the weekend saw identical results and Ann Jenifer from Chennai won the championship by a narrow margin of 7 points.

TVS Apache RR 310 Open:
In both races over the weekend, Chennai’s Deepak Ravikumar and Amarnath Menon from Calicut finished 1st and 3rd, respectively, in both races over the weekend. The 2nd spot on the podium was claimed by Peddu Sriharsha on Saturday and Kannan on Sunday. The final round saw modified RR 310 race bikes hitting the track with significant weight reduction and stickier tyres that saw the lap times drop significantly. Deepak Ravikumar took a convincing win in the inaugural RR 310 Cup

TVS Apache RTR200 4V - Novice (6 laps):
The Apache 200 one-make championship is one of the most accessible entries into racing in India. The championship is open to anyone with a license from an FMSCI-certified racing school, and the riders are selected based on time trials.