Indian teams get their first taste of MotoGP 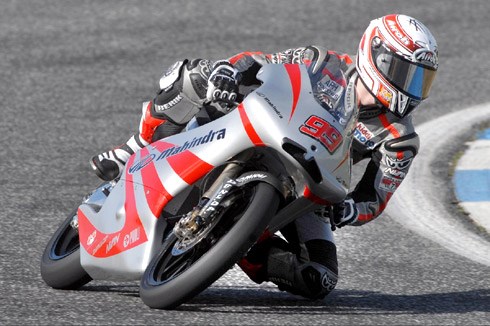 Final pre-season test session for the 125 class of MotoGP has recently culminated at Jerez, Spain.

Mahindra Racing got off to a good start on day 1, Danny Webb posting the second fastest time of the morning session. By the end of the day, Danny had however slid to 13th place, while team mate Marcel Schrotter ended up in 21st. Webb slid further on the second day, ending at 19th position, Schrotter coming in 25th. And at the end of the third days testing, Webb was 21st on the timesheets, while Schrotter stood 24th.

Day 1 saw Sarath Kumar of WTR-Ten10 finishing 28th, team mate Francesco Mauriello in 23rd. Both riders moved to the bottom of the time sheets on day 2, Mauriello 28th, with Sarath last in 29th. WTR-Ten10 duo ended their test in the same positions on the final day.

With race day less than two weeks away on 20th March, it remains to be seen how the two rookie Indian teams perform in their debut race, Qatar.