A hydraulic failure during FP2 curtailed the Indian's second free practice half-way through the session. 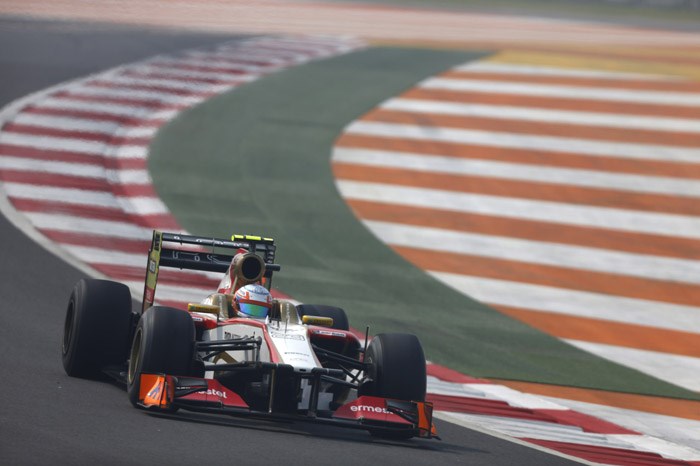 After completing a productive first practice which kicked off the Indian Grand Prix weekend on Friday, Narain Karthikeyan suffered a setback later in the afternoon when his second practice was cut short due to a hydraulic failure.

The only Indian on te grid looked on  pace right from the first lap, given his knowledge of the Buddh Circuit where he finished 17th last year.

As expected, the track evolved greatly during the first 90-minute session, and the team spent most of the time testing the new rear wing and optmising the base setup using the hard tyre.

"The track was in much better shape compared to last year, but still there was a huge amount of evolution", said the the HRT driver.

"It was literally changing every lap so we also sat in the garage for some time to wait for things to stabalise a bit."

At the end of the session, the Indian was 22nd - ahead of Marussia's Timo Glock and teammate Pedro De La Rosa.

The second practice session was set to be intense, with a program consisting of optimising the suspension and a soft-tyre qualifying simulation.

The team spent the first half of the session doing several five-lap runs on the hard tyre and dialling out the understeer that had creeped in after the track was rubbered in. Karthikeyan then switched to soft tyres thereafter but had to return to the pits almost immediately.

"We thought it was a small issue but once we pushed the car into the garage it was clear it couldn't be fixed in time to go out again.

"The situation wasn't ideal as we were unable to see what the car was like on the soft tyre, but looking at the data after the session I think we should be competitive", as his teammate managed to finish ahead of both Marussias.

"As long as we are able to complete our FP3 program normally and have no surprises in store we should be ok."