Vettel led the way with a time of 1m21.264s as the top five drivers were covered by less than three tenths of a second. 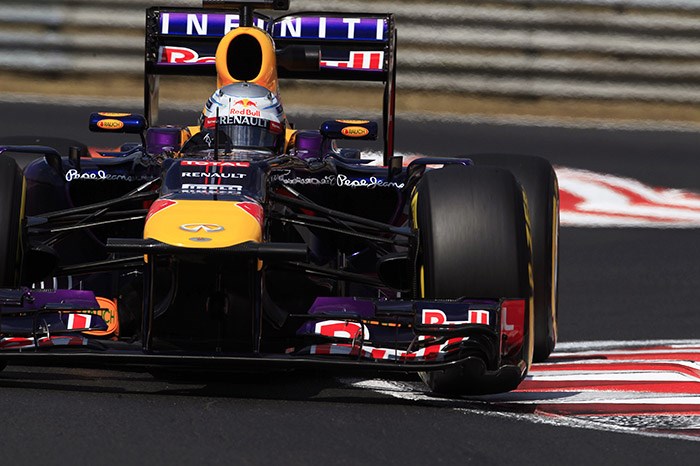 The German and the Australian had topped the morning session and they repeated the feat when drivers used the softer Pirelli tyres in the afternoon.

Vettel led the way once more with a time of 1m21.264s as the top five drivers were covered by less than three tenths of a second.

Lotus's Romain Grosjean was the fastest of the non-Red Bull drivers ahead of the Ferraris of Fernando Alonso and Felipe Massa.

Lewis Hamilton and Mercedes team-mate Nico Rosberg were sixth and seventh respectively as Mercedes did not show the kind of one-lap pace that has secured it the last two pole positions.

Vettel needed just a few minutes to move to the top of the times with the fastest lap of the weekend so far, the Red Bull driver posting a 1m22.484s 10 minutes into the running.

Although Webber managed to reduce gap as the session progressed, Vettel raised the bar at the 30-minute mark and went a full 1.2 seconds quicker with Pirelli's soft tyres.

The Australian reacted right away, however, and - also using the softs - move to within 0.044s of Vettel's time.

Rosberg's first run on softs elevated him to third place, albeit over seven tenths of a second behind the pacesetter.

Hamilton outpaced his team-mate with the yellow-marked rubber, although he too was far from Vettel's time despite Mercedes' single-lap pace.

Ferrari drivers Alonso and Massa relegated the Mercedes duo at the halfway point, with the Spaniard moving into third ahead of his Brazilian team-mate. Both men were running with the soft tyres.

Grosjean then got even closer to the Red Bulls - just 0.153s behind - and jumped to third place in the Lotus.