Hamilton was the favourite for pole after topping all three free practice sessions, but he was eliminated just five minutes into Q1. 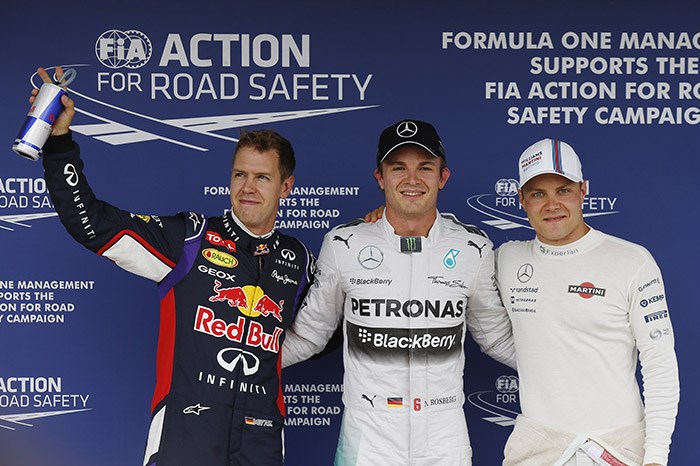 Hamilton was the favourite for pole after topping all three free practice sessions, but he was eliminated just five minutes into Q1 when he stopped in the pit entry with the rear of his Mercedes ablaze thanks to a fuel leak.

But although this meant Rosberg's main rival was not in contention, rain that struck at the start of Q3 made the world championship leader's task difficult.

Rosberg was the first onto the track on slick tyres with conditions worsening, but with the first corner particularly wet he slid off into the runoff area on his first flier, ruining his lap.

But Kevin Magnussen, who was second on the road, also outbraked himself, hitting the tyre barrier on the outside of the corner and bringing out the red flag before anyone could set a time.

When qualifying resumed after an eight-minute delay, the rain had eased and while the track was slippery, everyone opted to continue on slicks.

With the track drying up, everyone went back out on slicks, with Rosberg going fastest on his second flying lap after a brief spell at the top of the times for Williams driver Valtteri Bottas.

But unlike Rosberg, who stayed out and used only one set of softs in Q3, Vettel pitted for new rubber and took top spot from the Mercedes driver on his final lap.

Vettel held onto second ahead of Bottas, the latter also opting to pit for new tyres, with Daniel Ricciardo fourth fastest.

Fernando Alonso and Felipe Massa were fifth and sixth, both also having two runs in the restarted Q3 segment, with Jenson Button eighth ahead of Jean-Eric Vergne.

Force India driver Nico Hulkenberg was the slowest of those to set a time in Q3 in ninth, with Magnussen classified 10th having not set a time before his crash.

Daniil Kvyat was in contention for a top 10 slot, but he locked the rears at Turn 12 on his final lap in Q2 and spun, ending up 11th.

Sauber driver Adrian Sutil was 12th ahead of Sergio Perez, who suffered a hydraulic leak during Q2 and could only attempt one run.

Esteban Gutierrez took 14th ahead of Romain Grosjean, with Jules Bianchi ending up 16th after an excellent performance to make the second stage of qualifying.

Kimi Raikkonen was a shock casuality during Q1, ending the session 17th fastest.

With Hamilton and Pastor Maldonado, whose Lotus had stopped early in Q1, not running, most teams opted not to send their cars out for a second run on the basis that they only needed to finish ahead of the Caterhams and the Marussias to make the next phase.

But Raikkonen was the slowest of those who did not attempt a run on soft rubber and when Bianchi put in his final lap, the Finn was relegated to the dropzone while sat in the garage.

Caterham driver Kamui Kobayashi was 18th ahead of Max Chilton, who suffered a fuel pressure problem on his final run, with Marcus Ericsson slowest of those who set a lap.

Hamilton was classified 21st ahead of Maldonado thanks to starting a flying lap.