The Briton pulled himself clear of a fraught race behind, in which Kimi Raikkonen ultimately beat Sebastian Vettel to second. 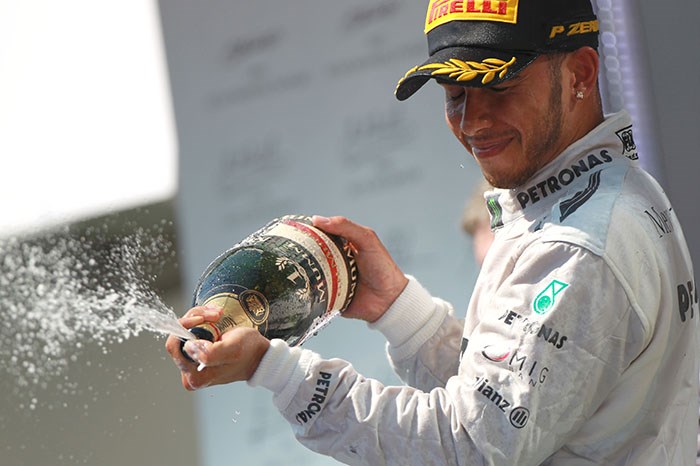 Lewis Hamilton claimed his first victory for Mercedes with an imperious drive in the Hungarian Grand Prix.

The Briton pulled himself clear of a fraught race behind, in which Kimi Raikkonen ultimately beat Sebastian Vettel to second, Mark Webber salvaged fourth and Romain Grosjean's chances were spoiled by a penalty.

Hamilton's initial battle was with qualifying rivals Vettel and Grosjean, after a spicy first lap in which slow-starter Vettel had to defend hard from the Lotus as Fernando Alonso and Nico Rosberg also tried to get involved.

The Red Bull was right on the Mercedes' tail at first, but as the opening stint wore on, Hamilton had some respite with Vettel instead under pressure from Grosjean.

The crucial moment for Hamilton was when he emerged behind Jenson Button after his first pitstop.

Hamilton rapidly overtook and, despite the McLaren's best retaliatory efforts, pulled away.

Vettel could not do the same when he also found himself tailing Button after pitting.

The two made light contact, leaving Vettel concerned about his front wing and allowing Grosjean plenty of chances to attack, as Alonso closed in too.

It took until lap 24 for Vettel to finally pass Button, with Grosjean clashing with the McLaren as he tried to follow.

Both continued, but the incident will be investigated post-race.

Grosjean still got a penalty in the race as well. Following his second pitstop, he boldly passed Felipe Massa's Ferrari around the outside of the fast Turn 4.

But the stewards adjudged that he had exceeded track limits in doing so and bestowed a drive-through, dropping him out of contention.

By the time Vettel was clear of Button, Hamilton had a commanding advantage over the world champion that he would not lose.

The other Red Bull was not defeated yet, though. Webber ran a very long first stint on his medium tyres and spent a while in the lead.

On their slightly different sequences, Hamilton twice emerged right behind Webber after pitstops, and twice passed him on the outside of Turn 3, with Webber ending up taking to the run-off in the second move.

Those passes ensured Webber had no chance of delaying Hamilton's progress as the Briton wrapped Mercedes' third victory of 2013.

Meanwhile Raikkonen worked his way forward on a two-stop strategy, spending the early part of the race trapped behind Massa before bringing himself into contention.

His consistent pace meant that he emerged in second place as the final stops played out, with both Red Bulls behind him.

Vettel tried his utmost to pass Raikkonen in the closing laps and complained that the Finn was over-defensive in what turned out to be a decisive dice with two laps to go.

Webber tried to chase down this pair but had to settle for fourth, while Alonso fell away from the leaders and could only fend off Grosjean for fifth.

McLaren got both its cars in the points on two-stop strategies, with Button seventh and Sergio Perez ninth.

First-lap contact with Rosberg and a later brush with Adrian Sutil hampered Massa's day and he finished eighth.

Rosberg tumbled down to 12th in his incident with the Ferrari. He recovered to ninth before a fiery late-race failure.