The Mercedes driver topped both sessions of the day at Hungaroring. 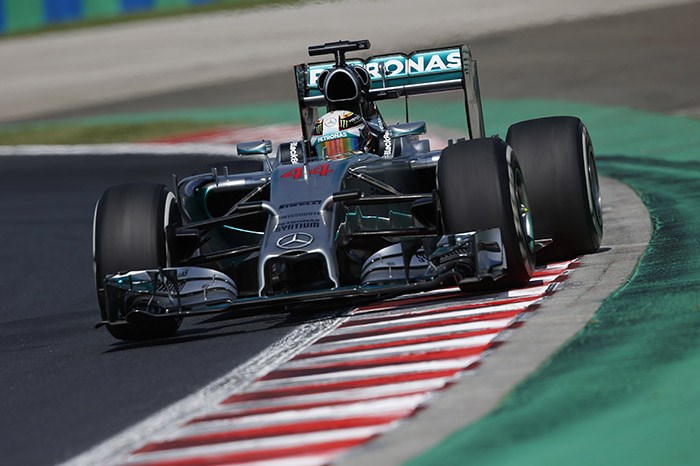 The Mercedes driver, who earlier topped morning practice, was fastest during the early stages of the session when everyone ran on the slower medium-compound Pirelli tyres.

Red Bull pairing Sebastian Vettel and Daniel Ricciardo briefly took first and second positions thanks to switching onto the faster softs before Mercedes just after the half-hour mark.

But Rosberg then put Mercedes back on top with his first flier on the faster rubber, while team-mate Hamilton had a scruffy start to his run.

Hamilton then put in two faster laps, first outpacing Rosberg by 0.207s and then improving his best mark by 61 thousandths on the sixth lap of his run.

This was despite complaining several times during the session of struggling with the brakes, saying over the radio early on that "I can't seem to stop the car".

Vettel, who had an off at the chicane in the early running, held on to end up the best non-Mercedes in third overall, six tenths off the pace and three tenths up on old title rival Fernando Alonso.

McLaren driver Kevin Magnussen, who ploughed through the gravel at the chicane in the early running, was fifth fastest ahead of Ferrari driver Kimi Raikkonen, with Ricciardo sliding to seventh as others improved on the soft rubber.

Williams was lower down the timesheets than usual, with Valtteri Bottas eighth ahead of the second McLaren of Jenson Button.

Felipe Massa was 10th after suffering a spin early in his soft-tyre run before a car problem forced him to return to the garage and miss out on some of the planned long-run track time.

Williams engineering boss Rob Smedley was seen examining the left-rear wheel in the garage, suggesting the problem might have been in that area.

Daniil Kvyat and Jean-Eric Vergne was 11th and 12th ahead of Force India's Nico Hulkenberg, who had briefly been third after being the first to try the soft rubber.

Adrian Sutil was the faster of the two Sauber's ahead of Sergio Perez's Force India.

Behind them were the two Lotus entries of Pastor Maldonado and Romain Grosjean.

Maldonado suffered a quick spin on his first run, but recovered to complete a full programme, while Grosjean's running was restricted by the team having to chase a cooling system leak.

Kamui Kobayashi, another to suffer a spin, was 19th fastest ahead of both Marussias and Caterham team-mate Marcus Ericsson.