Hamilton denied Vettel after the German had put himself out of reach early on with an incredible first flying lap in Q3. 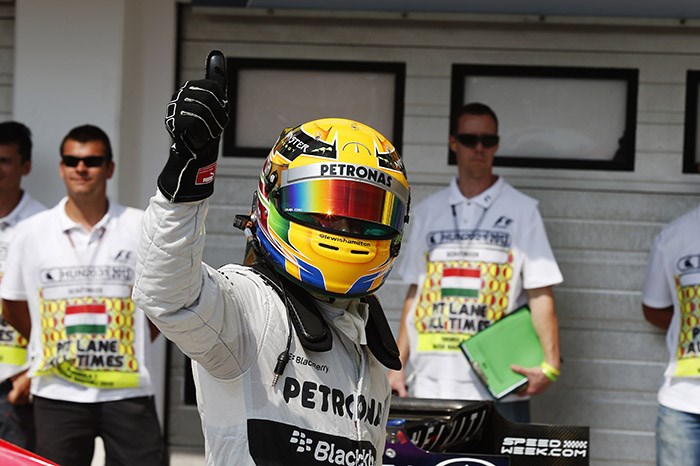 Vettel seemed to have put himself out of reach with an incredible first flying lap in Q3 that was 0.8 seconds clear of the rest of the field.

But Red Bull had the advantage of still having fresh soft tyres for both Q3 runs, whereas its rivals were all saving their rubber for their final lap.

At first, Vettel remained too fast to catch, with final practice pacesetter Romain Grosjean getting closest in his Lotus.

Then Mercedes driver Hamilton produced a 1m19.388s to depose Vettel, and although the world champion was also improving his pace, he fell 0.038 seconds short.

That was far better off than his team-mate Mark Webber. Vettel's closest rival on Friday had a KERS failure early in qualifying.

Webber struggled through to Q3 but did not run in the final segment so will start 10th in the second Red Bull.

Ferrari was not a factor in the pole fight, with Fernando Alonso fifth and Felipe Massa seventh.

Kimi Raikkonen was briefly on the provisional front row as he completed an early final run, but his Lotus ultimately fell to sixth.

Sergio Perez was the other Q3 contender in ninth, sticking to medium tyres rather than going for pole. His McLaren team-mate Jenson Button understeered to 13th.

But Paul di Resta ending up 18th was a shock to both the Scot and Force India, left baffled by the performance of his final set of tyres.

Caterham proved comfortably quicker than Marussia in the tail-end fight, while brief late-Q2 top-10 appearances by both Williams drivers proved deceptive as they were shuffled back to 16th and 17th.