Hulkenberg on top at Barcelona on day two 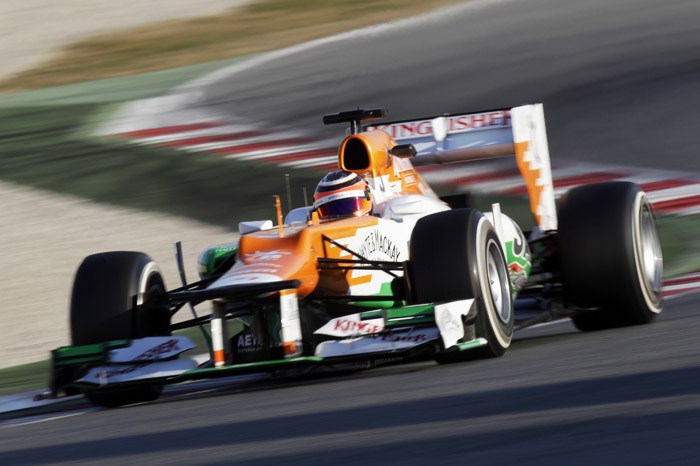 With the sun at its zenith in the afternoon, teams opted to pursue long-run programmes rather than chase outright times, and there was therefore little change to the morning's order.

Fernando Alonso in the F2012 was one of the rare movers, as a late 1m23.180s - set in the final 30 minutes - moved Ferrari up to fourth, ahead of Daniel Ricciardo in the Toro Rosso.

The Australian was not able to register a lap until the final minutes of the afternoon, when he banged in two mid-1m25s.

Valtteri Bottas and Charles Pic were the only other drivers to ostensibly improve – the Finn registering a 1m25.738s and the Frenchman a 1m27.343s. Neither improved in the order however, staying eighth and tenth respectively.

There was still plenty to be learned though, not least from the fact that Red Bull and McLaren were both able to complete almost full race simulations runs - a useful indicator that they are fairly comfortable with their 2012 challengers.

Red Bull's performance was in stark contrast to the morning, where it managed just 31 laps, the least of any team. In the afternoon it completed a 67-lap run broken only by pitstops, with Vettel switching between tyre compounds throughout.

His run coincided with Hamilton's, with the pair at one point the only two on track and separated by less than a second – Vettel eventually working his way past after spending several laps tucked up behind the MP4-27.

Hamilton ended the day with 121 laps completed, one of five drivers – Vettel, Nico Hulkenberg, Bottas and Pic the other four – to break into triple figures.

It was Hulkenberg who ended the day on top however courtesy of a late lap in the morning session, set on Pirelli's super soft compounds.

Sergio Perez, who finished just four hundredths of a second down the road, and Ricciardo also set their best times on the red-painted rubber.

Vettel's afternoon runs married with strong pace in the morning, with the German setting the pace until Hulkenberg and Perez's late runs.

He ended the day third fastest, ahead of Alonso, Ricciardo and Hamilton.

Nico Rosberg was the last driver to get within two seconds of Hulkenberg as he got to grips with Mercedes W03 for the first time in public.

Bottas, Petrov and Pic rounded out the day's order, with Lotus deciding to abandon the test after discovering chassis problems on the opening day.