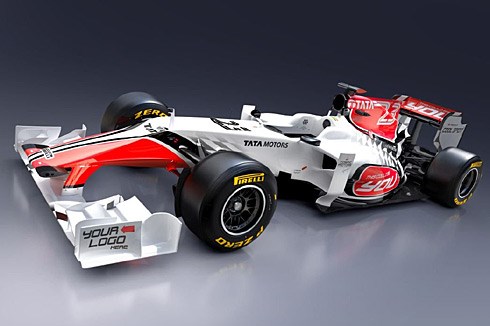 HRT has unveiled the first graphic images of its new F111, and the revamped colour scheme that it will race with in 2011.

Following its battle just to get on the grid last year, team principal Colin Kolles has worked hard this winter to give the team a stable platform with which to make progress with in the season ahead.

With technical chief Geoff Willis and chief designer Paul White working hard on a new car, Kolles also brought in renowned design expert Daniel Simon to create a new corporate image. The striking new look, which is mainly white with a chequered flag design at the rear and red flashes on the airbox and sidepods, is a total rethink on last year's grey colours.

Kolles said: "The F111 represents a significant step forward for Hispania Racing. We have made a big improvement for starting our second season in Formula 1 and what you see in our new car confirms Hispania Racing's commitment to F1."

HRT president Jose Ramon Carabante added: "We feel really proud of the car our drivers will run this forthcoming season. We are very pleased to introduce the first spec of the F111, which means a huge design-effort from our side. This is only a first step as we are planning several updates during the season."

The car features sponsor logos of Narain Karthikeyan's backers Tata, as well as spaces where other sponsors can feature their logos. It is understood that the F111 will undergo its last mandatory FIA crash test before final preparations are made to get in on track at one of the pre-season F1 tests.