Here is the HRT car that Karun Chandhok will drive in his maiden season. 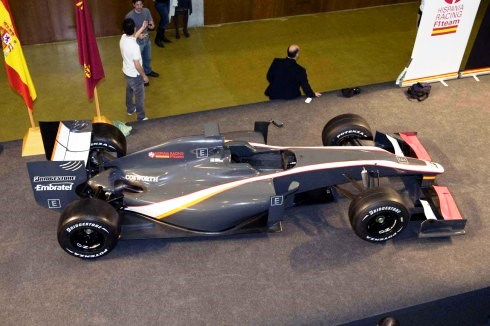 The new HRT Formula 1 team unveiled its 2010 challenger - just more than a week before the car is set to hit the tracks at the season-opening Bahrain Grand Prix.

With the Spanish team having announced that Karun Chandhok will partner Bruno Senna, both drivers were present at the launch that took place in the city of Murcia.

The HRT challenger has been designed by Italian racing car constructor Dallara - which endured weeks of uncertainty in its preparation following financial problems with the outfit when it was known as Campos.

Dr Colin Kolles, Team Principal, commented, "I am  very pleased to use the Murcia site to officially unveil our car livery that reflects the Murcia identity. We also  complete the driver's team line up with the Indian Karun Chandhok at the wheel of the car for our first ever season. We have been very impressed with Karun's performance in GP2. India is a great country. It will be great for the sport to have an Indian driver on the grid for the first Indian Grand Prix."

"Murcia is part of the roots of the team. Everything is now in place after an impossible race against time to register the team's name and I truly believe that we have an excellent platform to build on and move forward for a strong 2010 performance. Now, we need to work together. We need to learn together and keep developing as a team."

With no testing allowed before the start of the season, HRT's car is likely to run for the first time during Friday free practice in Bahrain.