A win and a 2nd-place finish puts Varoon from Chennai in the championship lead. 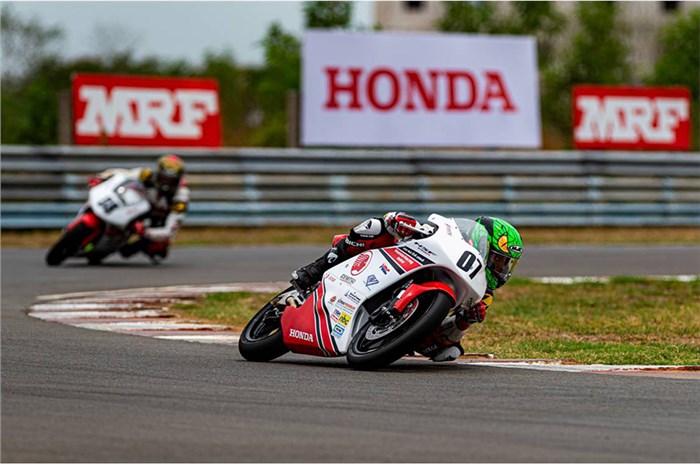 This past weekend, the first round of the Honda NSF250R Talent Cup took place at the Madras Motor Race Track in Chennai. The NSF250R is essentially the same motorcycle that Danny Kent won the 2015 Moto 3 World Championship with; and it’s the first time a proper race-spec machine of that level is being raced in a one-make series in India. To give you an idea of how quick these machines are – the fastest lap of the weekend on the NSF250R was in 1:48:889s. The race-spec Pro Stock TVS RR310, which was the fastest bike in the pro-stock 300-400cc category, managed a 1:53:398s – a whole 5sec slower.

Up close, the NSF250R is something else; it’s the most neatly put-together race bike I’ve seen in person – from the welds that are almost hard to spot, to the way the body panels are waxed down before each session. Even the slick, tight bike-covers used in the pits compliment the high levels of finish on the bike. The NSF250R is started in proper race bike fashion with the help of wheel rollers; and after that the high-revving single-cylinder symphony takes over, suppressing all other ambient noise.

The four-round race series is one of the biggest opportunities young riders in India have had to make it to the international stage and the eight selected riders aged between 12-19 years certainly put on a great show over the two race weekend. To be honest, I was extremely impressed by how quick they were, and by their clean and technical racing.

Mohammed Mikail and Kritik Habib also race the Moto-3-spec NSF250R in the Thai Talent Cup; and given this experience, it was no surprise they topped Saturday’s qualifying with Varoon from Chennai rounding up the front row. However, at the end of the six-lap race, a clean and consistent effort from Varoon saw him finish in 2nd place right behind Mikail – and while setting the fastest lap of the race with a time of 1:49:446s. Kritik dropped down to 4th and Kavin Samaar Quintal took the 3rd step on the podium.

Race 2 on Sunday featured a lot more action and was certainly one of the most interesting races of the weekend. Unlike with certain other races, the starting grid for the second race was also based on Saturday’s qualifying and not the results of Race 1. The drama ensued as soon as the lights went off. Pole-sitter Mohammed Mikail launched off the line and ran into the path of Kritik Habib. The two riders clashed and despite an attempt to regain control, Mikail ran into Mohsin who started in 6th place, ending the race for both of them. A couple laps into the race, Kritik Habib crashed, running wide at the last corner that leads onto the main straight. The youngest of the lot, 12-year-old Sarthak was running in 4th place, but unfortunately crashed out with just a lap to go, taking the total DNFs to four. A dominating win for local boy Varoon, who finished 9.372s ahead of Kavin, awarded him the lead in the overall points table.

At the end of an action-packed weekend, the eight young riders will be looking to learn from their first outing on the NSF250R at the MMRT; and will hope to come back stronger for the next round.

Honda has also informed us that they will be overseeing the overall development of the riders – from their performance on the track to their fitness, diet and mental preparation for a race. Irrespective of how this season goes for some riders, the experience they will gain over the next few months is unlike anything ever before.