Despite enduring a challenging final round in Thailand, Honda Racing India finished 9th overall in the championship. 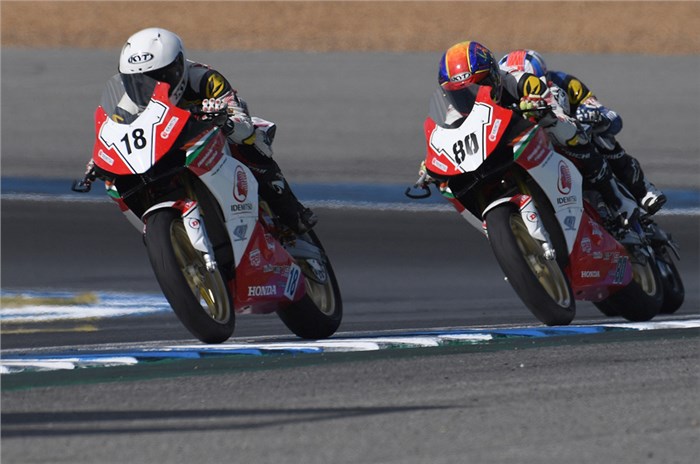 Honda Racing India has wrapped up the 2019 Asia Road Racing Championship (ARRC) in a commendable 9th place out of a total of 20 teams. Despite encountering a few hiccups along the way, the team managed to score points in all seven rounds in the Asia Production 250cc (AP250) class.

The championship headed to the Chang International Circuit in Thailand for its 2019 finale, and the circuit happens to be one where Rajiv Sethu has enjoyed some strong performances in the past. After qualifying down in 16th place for Race 1, Sethu was able to gain two positions to finish the race in 2nd place and bag two points for the team. His teammate Senthil Kumar initially dropped to 27th place at the start, but some aggressive racing saw him gain a total of nine places in quick succession. However, he ended up crashing out of the race on the opening lap itself, while trying to overtake two riders at the last corner.

Race 2 ended up being a tough one for Honda Racing India. Despite initially securing a double top 15 finish, both Sethu and Senthil were hit with a five place penalty for exceeding track limits at Turn 12 on the final lap. This dropped Senthil from 11th to 16th place, and Sethu from 13th to 18th place. As a result, the team didn’t secure any points in the last race of the season.

Nevertheless, the team’s performance in the earlier races was enough for it to secure 9th place in the teams’ standings. Sethu ended up 17th overall in the riders’ standings, a marked improvement on his 27th place finish in the series last year. Senthil ended up finishing 30th overall, but it’s been a crucial year of learning in what has been his rookie season in the series. In a display of his progress this year, the 18-year-old climbed a total of 11 places in the final race to secure his best-ever finish in the series before he was hit with the penalty.

Reflecting on the team’s season, Prabhu Nagaraj, Vice President - Brand and Communications, Honda Motorcycle & Scooter India Pvt. Ltd. said: “For the youngest Indian rider at ARRC, Senthil did his best ever finish at 11th, broke the 1.55sec lap time barrier and gained as many as 11 positions in the AP 250 race for the first time. Rajiv too has grown immensely and our 2019 performance has made others take us as serious competition now. Surely, today the penalty was a downer but it is an opportunity for our riders to better their craft even further.”