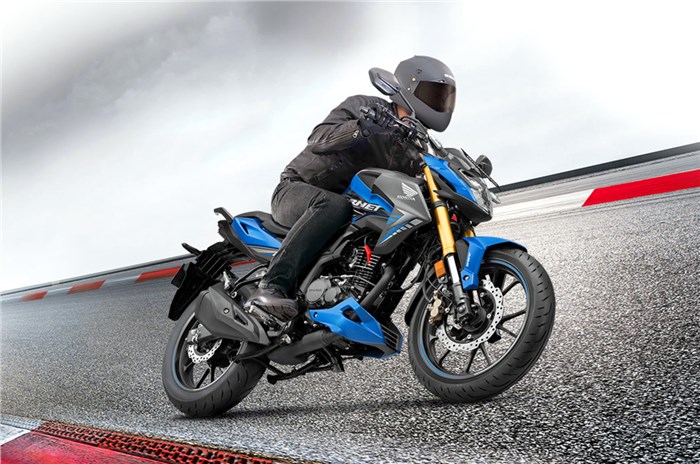 The 2021 season of the MRF MMSC Indian National Motorcycle Racing Championship (INMRC) will get underway at the Madras Motor Race Track (MMRT) this weekend. Honda is introducing its new Hornet 2.0 One Make Race category for this year’s championship, and this will run alongside the Honda India Talent Cup.

Additionally, the manufacturer has also confirmed its rider team for the Pro-Stock 165cc class.

Following the launch of the Hornet 2.0 last year, Honda has decided to have a dedicated one-make racing series with the bike. The 15-rider grid will initially be invite-only, but by the mid-way point of the season, Honda is looking to open it up to customers as well.

“We thought this [the Hornet 2.0] would be the apt model for providing the opportunity for enthusiasts to come on track and experience racing in a very controlled environment. And at the same time, this is also an opportunity for the customers who want to race, they can have the opportunity on the track,” explains Prabhu Nagaraj, senior vice president – brand and communication, Honda Motorcycle and Scooter India.

Nagaraj also confirmed that the machines used will largely be stock bikes, with some minor modifications and weight reduction to make them race-ready.

Honda will once again be competing in the Pro-Stock 165cc class with riders Rajiv Sethu and Senthil Kumar. Both riders have been part of the Honda fold for a while and have international racing experience, having participated in the Asia Road Racing Championship.

Speaking with Autocar India, Sethu believes he’s going to have a much stronger season this year. “Last year was very difficult for me because we didn’t have much track time and the pandemic went on for a really long time. This year I feel more confident physically and mentally and I feel much more confident that I can do better than last year,” said the 23-year-old.

COVID-19 has caused disruptions this year too, but Sethu believes he’s had enough track time and training since the restrictions were eased earlier this year.

Shaping racers of the future

The Idemitsu Honda India Talent Cup also returns for a new season. The NSF250R category gives young riders, aged between 12 and 19, the chance to race on international-level machinery with the NSF250R Moto3 racer. Meanwhile, the CBR150R acts as a feeder series for those looking to compete in the Honda India Talent Cup NSF250R. Two riders – Shyam Sundar of Chennai and Vivek Kapadia of Belgaum – will in fact move up to NSF250R after earlier competing in the CBR150R category.

Honda has always maintained that with its racing programme here in India, it wants to shape young riders to move on and compete internationally. Nagaraj believes this ladder system provides a much-needed roadmap for aspiring racers. “Previously there wasn’t much of a roadmap available, so people were not sure of how they should proceed and how they can get opportunities. So, with our programme, at least we have that roadmap available for them and in case they are interested, if they’re serious and they perform well, they’ll definitely have the opportunity,” he said

Riders who impress in the NSF250R can get the opportunity to participate in international events like the Thai Talent Cup and even the Asia Road racing Championship. Six of the seven riders shortlisted for the Asia talent Cup this year belong to the Honda India Talent programme.

Nagaraj adds that the programme has made good progress, singling out one of the 2021 CBR150R riders Ashwin Vivek as an example. At just 11 years of age, Vivek is the youngest-ever rider in the class and was identified at the 2021 Honda India Talent Hunt earlier this year. He’ll be joined by Steve Waugh Sugi, who also graduates from the Honda India talent Hunt. “We are catching them young because they can be at an age to compete internationally whenever they skill up,” explains Nagaraj.