CS Santosh, Joaquim Rodrigues and Oriol Mena will compete in the 2019 Dakar Rally for Hero MotoSports. 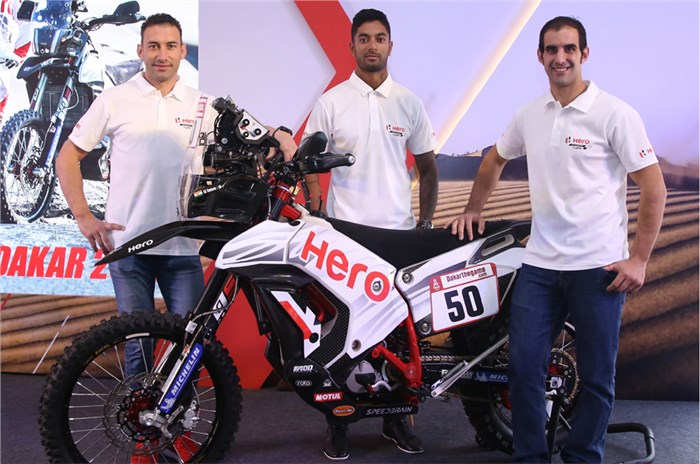 Hero MotoSports will field an unchanged rider line-up of CS Santosh, Joaquim Rodrigues and Oriol Mena for the 2019 Dakar Rally, which will be held from January 6-17, 2019.

All three riders will compete on Hero’s RR450 rally bike. Despite being the same bike used for the 2018 Dakar Rally, Hero MotoSports has participated in a number of events throughout the year as part of its ‘Road to Dakar’ initiative – including the Merzouga Rally in Morocco, Atacama Rally in Chile, Baja India Rally and Peru Desafio Inca Rally – giving the team the chance to further fine-tune the bike.

This will be Hero MotoSports’ third consecutive Dakar Rally. The team has made steady progress over the years, even securing a top 10 finish at the 2018 Dakar Rally with Mena finishing seventh overall and taking top honours in the rookie class.

“I couldn’t have wished for a better debut in rally racing with Hero MotoSports Team Rally providing a fantastic platform and support to me. This also raises the stakes for me at Dakar 2019, so I have been training hard and aim to improve my performance this year,” said Mena.

CS Santosh will be competing in the event for a fifth time and will be looking to top his best-ever Dakar result of 34th place this time around. “This will be my third Dakar with Hero MotoSports and fifth overall. It has been a very exciting three years and I’m geared up for yet another rendezvous with this unique event. I am satisfied with the preparations and look forward to delivering a solid performance. We have had a good training season and I tried to make every session count. Ultimately, it’s about enjoying the process and arriving at the finish line,” he added.

Rodrigues, meanwhile, endured a rather difficult 2018 Dakar outing after crashing out in the first stage itself. “It feels great to ride again, after my accident at Dakar 2018. The recovery has been tough and long but thanks to the prayers and love from my fans I am able to ride again. I have been training particularly hard with a focus on arriving at the finish line safely,” he said.

The 2019 Dakar Rally will mark the first time that the event will be held in just one country. The rally will comprise of 10 stages in Peru, with the racers starting from Lima, cruising through terrains of Pisco, San Juan de Marcona, Arequipa and Moquegua, covering a total distance of over 5,000km.