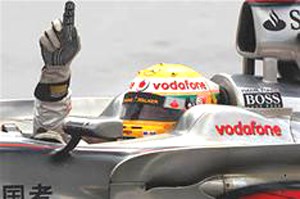 Timo Glock of Toyota and Fernando Alonso of Renault completed the podium with brilliant drives for their struggling teams, after pitlane penalties spoiled the party for Nico Rosberg and Sebastian Vettel. Championship leader Jenson Button managed to extend his points advantage by recovering from 11th on the grid to finish fifth - one place ahead of his Brawn team-mate and main title rival Rubens Barrichello, who is now 15 points behind with three races to go.

Hamilton shot into a clear lead from pole position, with Rosberg's Williams slipping past Vettel to take second and leave the Red Bull to fend off Alonso. Vettel managed to squeeze in front of the former champion through the first corners, allowing his team-mate Mark Webber to take advantage and attack the Renault for fourth.

Glock and Alonso could not keep pace with the top three, who disappeared into the distance through the first stint. Rosberg never let Hamilton get more than 3s ahead, with Vettel also within 5s of the leader, although Hamilton's extra laps before his pitstop meant he always had the advantage.

Rosberg still looked like a genuine threat for victory until he ran wide in the pit exit as he rejoined after his first stop. The Williams crossed the blend line and kerbs at the right handed part of the exit lane, and although Rosberg quickly tucked back in, he had already done enough to incur a penalty.

That became even more costly when the safety car was called moments later. Adrian Sutil had spun his Force India in a desperate bid to pass the much slower Toro Rosso of Jaime Alguersuari, and then clouted Nick Heidfeld's BMW as he tried an immediate spin-turn - ending both Germans' races.

With Rosberg out of the way, Vettel made use of a smaller middle stint fuel load to hound Hamilton after the safety car period, sitting right behind the McLaren until pitting on lap 38. This was where Vettel's challenge for victory ended as he picked up a pitlane speeding penalty, leaving Hamilton free to cruise away and collect a second win of 2009.

Glock pulled away from Alonso in the second half of the race, and as Rosberg and Vettel hit trouble, the duo moved up to second and third - giving Toyota its first podium since Bahrain and the battered Renault team its first podium all season at the track where its scandal began.

The championship battle provided the late excitement. When Webber crashed at Turn 1 with brake problems 15 laps from the end, most of those yet to pit dived in immediately in case of a safety car - including Barrichello, who had been running fifth, 6s and two places ahead of Button.

But with the Red Bull cleared away without needing a full course yellow, Barrichello's caution cost him dearly. Button was able to enjoy five more low-fuel laps and jumped ahead of his team-mate, rejoining just behind Vettel - who had minimised the effect of his penalty with some very quick out-laps on super-soft tyres - in fifth place.

Both Brawns then eased off to conserve drastically fading brakes, easing home fifth and sixth. Heikki Kovalainen and Robert Kubica completed the scorers for McLaren and BMW. Ferrari had an anonymous race, with Kimi Raikkonen chasing Kubica and Kazuki Nakajima (Williams) home in 10th ahead of the delayed Rosberg, and Giancarlo Fisichella 13th after a race-long, occasionally physical, dice with his Force India replacement Tonio Liuzzi.

While Glock got Toyota back on the podium, his team-mate Jarno Trulli compounded his poor qualifying with a poor start and only finished 12th.

Toro Rosso had a hectic race, with Alguersuari pulling away too soon at his first stop and damaging the fuel rig, and both the Spaniard and Sebastien Buemi later retiring with separate mechanical problems on the same lap. Renault's Romain Grosjean was the other retirement, stopping on lap four with brake issues.