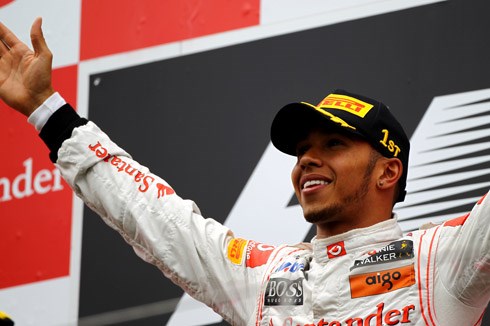 McLaren's Lewis Hamilton took his first grand prix victory since China in April as he emerged on top in a race-long battle with Fernando Alonso and Mark Webber in the German Grand Prix at a dry Nurburgring.

Polesitter Webber's third place behind Ferrari driver Alonso was Red Bull's best result of the day, as championship leader Sebastian Vettel had a muted home race and came home fourth after a lengthy dice with Felipe Massa in the second Ferrari.

Webber almost got swamped at the start, with Hamilton instantly sweeping past him and the two Ferraris then going either side of the Red Bull into Turn 1. Neither made it through, and while Alonso held on in third ahead of Vettel, Massa was edged out wide and dropped to sixth behind Nico Rosberg.

Vettel would get past Alonso for third when the Ferrari ran wide in the first complex on lap two, but six laps later the Silverstone winner was able to successfully retaliate into Turn 1. Soon afterwards, Vettel lost touch with the lead battle when he brushed the damp white marker line under braking for Turn 10 and snapped into a spin. He rejoined without losing a place, but the top three were long gone.

The lead briefly changed on lap 12, when Hamilton ran wide at the chicane and Webber got a successful run into the final corner - but the McLaren was able to get better momentum onto the pits straight still and squeeze back ahead.

Webber was the first of the evenly-matched lead trio to pit on lap 14. He initially lost time in traffic, but once in clear air he was able to start setting new fastest sector times, meaning that when Hamilton and Alonso pitted in unison on lap 16, they came out just behind the Red Bull.

Once the late-stopping Massa came in for his first tyre change, Webber finally found himself leading a lap for the first time in 2011, though he could not shake off Hamilton and Alonso.

Webber was again the first to come in when the second stops began on lap 30, with Hamilton and Alonso following suit over the next two laps.

This time the under-cut did not work. Hamilton rejoined ahead of Webber and determinedly fended off the Red Bull through the complex. Alonso managed to jump both of them, but Hamilton made the most of his warmer tyres to drive around the outside of the Ferrari at Turn 2 to retake the lead and then start edging clear, holding a three-second cushion while Webber began to drift away from Alonso.

With the medium tyres felt to be significantly slower, the leaders tried to stretch their third set of softs as long as possible. Hamilton came in on lap 50, and though Alonso held on for two laps longer, the McLaren was able to stay narrowly in front.

Webber rolled the dice and ran until lap 56 of 60 before finally taking the harder tyres, but it did not pay off, as he rejoined still some distance behind Hamilton and Alonso, with the McLaren taking what ultimately became a straightforward victory - setting the fastest race lap on the penultimate lap for good measure.

Vettel fell behind Massa at the first stops and spent the rest of the afternoon on the Ferrari's tail. Only when they finally pitted for hards with just one lap to go did Vettel manage to get fourth back as a day after missing the front row of the grid for the first time all year, he finished off the podium for the first time in 2011.

Adrian Sutil's best drive of the year brought him sixth place for Force India, as he made a two-stop strategy work superbly to beat the two Mercedes of Rosberg and Michael Schumacher. The latter had been challenging his team-mate until losing time with a mid-race spin at Turn 10.

A great start and a two-stop strategy helped Kamui Kobayashi come through from 17th on the grid to ninth for Sauber, just ahead of Petrov, who lost ground by staying out too long on his first set of tyres.

Jenson Button never featured at the front. A slow start dropped him to 10th, and he then spent the race in traffic, couped up behind Vitaly Petrov's Renault for most of the first stint. Just after making it past Rosberg and into sixth, the McLaren developed a hydraulic problem and had to retire.

Completing a disappointing day for the majority of the large home driver contingent, Renault's Nick Heidfeld tangled with Paul di Resta's Force India on the opening lap. The German earned a drive-through penalty for the incident, but never got chance to take it as by then he had crashed out for good in a clash with a wandering Sebastien Buemi (Toro Rosso) on the approach to the chicane.

Indian driver Karun Chandhok endured a tough first race outing for Team Lotus as he brought home the car in 20th place, and was the last classified finisher- which came as a surprise as he had managed to outpace the HRTs and the slower Virgin during qualifying.