Lewis Hamilton moved back into the lead of the Formula 1 World Championship with a dominant victory in a chaotic Belgian Grand Prix. The British driver was the class of the field all afternoon and survived two safety car periods and a trip through the gravel during a wet segment of the race to defeat Mark Webber by 1.5 seconds. 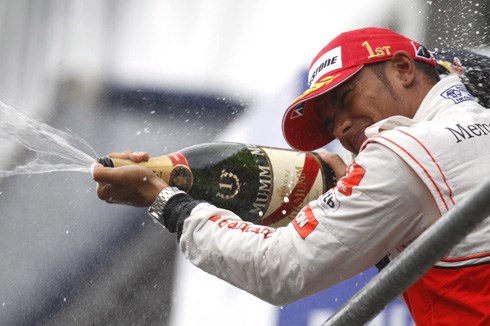 Lewis Hamilton moved back into the lead of the Formula 1 World Championship with a dominant victory in a chaotic Belgian Grand Prix. The British driver was the class of the field all afternoon and survived two safety car periods and a trip through the gravel during a wet segment of the race to defeat Mark Webber by 1.5 seconds.

grabbed the lead at the start of the race when polesitter Webber bogged down on the line and dropped to sixth as his Red Bull's anti-stall mechanism kicked in. The British driver was never challenged at the front - despite a brief burst of rain that caused him to run off the track at the Bus Stop chicane on the opening lap.

He pulled away at a rate of more than half a second per lap as the track quickly dried early on, and had an 11s advantage when another, heavier, bout of rain began on lap 35. Pushing too hard on slicks with the track becoming wetter, the 2008 world champion went off into the gravel at Rivage, but was able to avoid the barrier and drive back onto the track.

He pitted for intermediates at the end of that lap, as did the second-placed Renault of Robert Kubica and Webber, who lay third. Webber emerged second, however as Kubica overshot his pit and cost himself a handful of seconds while his mechanics attempted to change his tyres.

After a second safety car period - which began on lap 38 when Fernando Alonso crashed out - was able to pull away from Webber to the end. He now leads the Australian by four points with six races left. Alonso, whose retirement signalled a major blow to his championship ambitions, had fought his way back up to seventh after a disastrous start to his race.

Williams driver Rubens Barrichello, celebrating his 300th grand prix, clobbered into the Ferrari driver at the Bus Stop on the opening lap, putting himself out and relegating Alonso to the tail of the field.

Both Jenson Button and Sebastian Vettel also had their championship hopes decrease. After suffering front wing damage on the opening lap, McLaren driver Button had a train of four cars backed up behind him during the opening part of the race.

Vettel, third, got a run on the world champion exiting Blanchimont on lap 16, but lost control of his Red Bull and slammed into the side of the McLaren at the Bus Stop - putting Button out of the race.

The German broke his front wing and had to pit for repairs. He then received a drive-through penalty for causing the incident and later suffered a puncture after colliding with Vitantonio Liuzzi's Force on his way to a lapped 15th place.

Through the madness came Felipe Massa to fourth in his Ferrari and Adrian Sutil - after pulling a superb move on Michael Schumacher - to fifth in his Force India.

Nico Rosberg was sixth in the best of the Mercedes cars, which each made only one stop during the race when the rain came. He elbowed Schumacher aside at Les Combes with three laps to go and finished a place ahead of his team-mate.