Hamilton leads home a 1-2 finish for Mercedes, as an incident-packed race at Silverstone saw Vettel and Verstappen collide. 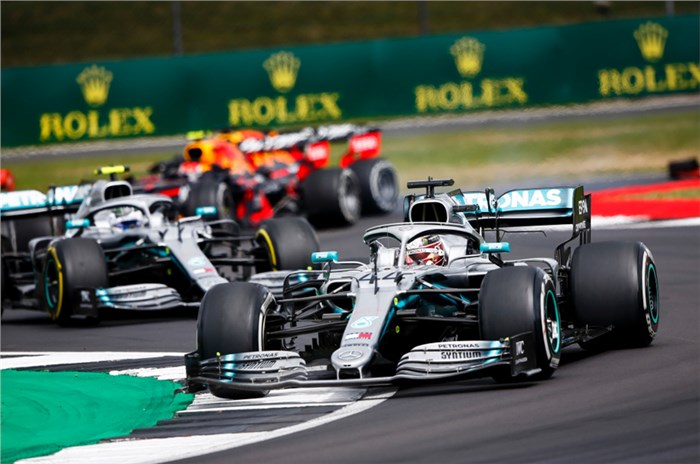 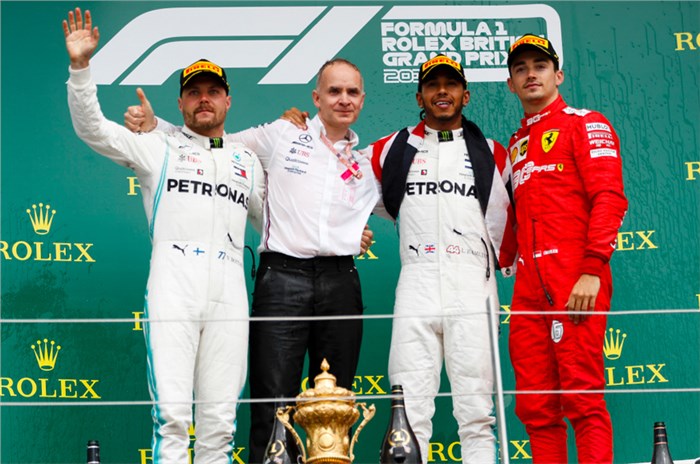 Nail-biting battles, overtakes, crashes and a home race winner – the 2019 British GP had all the ingredients to cook up a memorable F1 race. Much to the rejoice of the fans at Silverstone, Lewis Hamilton crossed the chequered flag in 1st place to pick up a record-breaking sixth British GP win, leading home a Mercedes 1-2 finish.

Valtteri Bottas had managed to fend off attacks from Hamilton to hold on to the lead in the first part of the race – Hamilton did briefly overtake him at Luffield, but Bottas regained the lead up the inside at Copse. Behind them, there was plenty of wheel-to-wheel action with Charles Leclerc and Max Verstappen, as well as Sebastian Vettel and Pierre Gasly battling for position in separate duels. Gasly did overtake Vettel, but then dived in to the pits for fresh tyres, with Leclerc, Verstappen and Bottas following suit soon after. Verstappen briefly got ahead of Leclerc in the pits as the two pitted at the same time, but the Ferrari driver retook the place after Verstappen ran wide after exiting the pit lane.

Both Hamilton and Vettel made the decision to extend their opening stint; and just when it looked like the gamble wouldn’t pay off, Antonio Giovinazzi beached his car in the gravel, bringing out the safety car. As a result, both drivers were able to overhaul the others by pitting under the safety car, and Hamilton took the lead ahead of Vettel. Red Bull pitted Verstappen too, while Leclerc ended up losing a handful of positions and dropped to 6th as Ferrari made the call to pit him a lap later.

Verstappen then swiftly overtook his teammate Gasly and starting cutting away at the gap to Vettel ahead of him. Chaos broke out on lap 37 when Verstappen overtook Vettel around the outside at Stowe but ran slightly wide. Behind him, Vettel locked his tyres and rear-ended Verstappen’s car, sending the Red Bull in the gravel. Miraculously, Verstappen was able to rejoin the race without any significant damage, but had to settle for a 5th-place finish. Vettel, on the other hand, had to pit for new tyres and a front-wing change, which dropped him down to last place. The stewards later handed him a 10sec penalty for the incident. As a result, he walked away from the race with a 16th-place finish and no points scored.

Out at front, Bottas took a free pit stop with seven laps to go, while Hamilton decided to stay out. Despite being on older tyres, Hamilton set the fastest lap on the final lap of the race to grab a bonus point. He comfortably cruised to victory 24.928sec ahead of Bottas, while the incident between Vettel and Verstappen promoted Leclerc to 3rd place, ahead of Gasly. Carlos Sainz took an impressive 6th place finish for McLaren after battling Daniel Ricciardo. Behind them, Kimi Räikkönen was able to make a one-stop strategy work to finish in 8th place, followed by Daniil Kvyat and Nico Hülkenberg.

With his 2019 British GP victory, Hamilton has now extending his championship lead to 39 points from teammate Bottas. Meanwhile, Vettel’s crucial error puts him 100 points adrift of Hamilton in the standings – in 4th place, behind Verstappen.