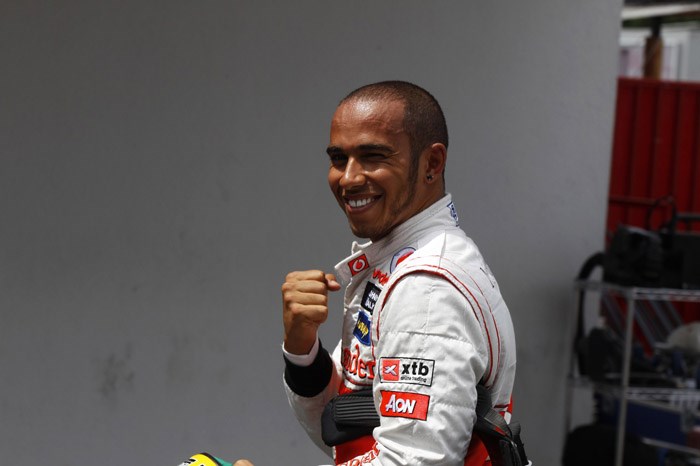 Lewis Hamilton took his first ever pole position at the Spanish Grand Prix by a commanding margin over shock front row man Pastor Maldonado of Williams.

Hamilton was half a second quicker than the fastest Williams, who had a strong performance in the final practice, before topping in Q2, and then snatching provisional pole from Fernando Alonso for a short while.

The McLaren was the only frontrunner to do two runs in Q3, and his initial benchmark stood until first local hero Alonso in the much improved Ferrari, then the incredible Maldonado beat him. But there was still more to come from Hamilton, who produced a 1m21.707s to give McLaren its 150th Formula 1 pole. The Briton then stopped on track on his slowing-down lap.

Just behind Maldonado, Alonso held third ahead of Lotus duo Romain Grosjean and Kimi Raikkonen, who again proved extremely competitive. Both Saubers made it into Q3, with Sergio Perez going on to take sixth, but Kamui Kobayashi consigned to 10th as his car expired on the way back to the pits at the end of Q2. Nico Rosberg was seventh after just one early run in Q3, while both Sebastian Vettel and Michael Schumacher chose to save tyres and not doing any flying laps in Q3, so qualified eighth and ninth.

The presence of the underdogs in the top 10 inevitably meant some big names were squeezed out in Q2, and it was Jenson Button - who had been uncomfortable with the McLaren's handling all day - and Mark Webber who found themselves on the wrong side of the cut-off. The McLaren and Red Bull will share row six, double Catalunya polesitter Webber having been sat in the pits at the end of the session as others improved and pushed him backwards.

It was a bad day for Felipe Massa as well, the Ferrari driver registering his worst grid position so far in this already-disappointing season as he qualified behind the Force Indias and Toro Rossos in 17th.

While Maldonado stormed towards the front, his Williams team-mate Bruno Senna pushed too hard in his efforts to keep up - spinning into the gravel at the end of Q1 and ensuring an instant exit.

Vitaly Petrov outqualified Caterham team-mate Heikki Kovalainen for the first time as the back-of-the-grid teams lined up in the usual order. Charles Pic was quicker than fellow Marussia man Timo Glock, and HRT's Narain Karthikeyan will needs stewards' permission to race as apparent mechanical issues left him a long way from the 107 per cent margin.