Rosberg led Hamilton by 22 points coming into the 14th round of the 2014 F1 season, but now trails his rival by three after a disastrous race. 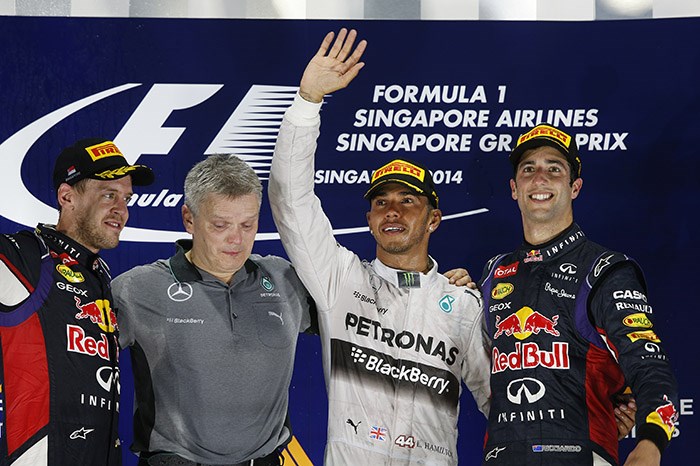 Rosberg led Hamilton by 22 points coming into the 14th round of the 2014 F1 season, but now trails his rival by three after a disastrous race.

After Rosberg narrowly missed out on pole to Hamilton by just 0.007 seconds in qualifying, the expectation was for another close fight between the Mercedes duo.

But Rosberg's problems began before the start, when his team discovered a glitch on the W05 and was forced to swap its steering wheel.

The German then had to start the race from the pitlane when he found he could not pull away from the grid for the formation lap unaided.

The Ferrari briefly rose to second but Alonso outbraked himself into Turn 1, used the runoff area, and handed the place back to Vettel.

Rosberg made little progress during the first stint, failing even to pass Marcus Ericsson's Caterham as he battled problems that were affecting his DRS, energy recovery systems and his gearbox, and eventually retired at his first pitstop on lap 13 - after another steering wheel change - when the car refused to re-engage first gear.

With his main rival removed from the race, Hamilton looked set for a comfortable win, but his superiority came under threat when the safety car was deployed for debris following the collapse of the front wing on Sergio Perez's Force India, following a brush with Adrian Sutil's Sauber, at the midway point of the race.

Mercedes decided not to pit Hamilton (yet to run the soft compound tyre) under the safety car, requiring him to stop again under racing conditions, so the 2008 world champion began hammering in fastest laps following the restart on lap 38 of 61, in order to open a big enough gap to the chasing pack to get in and out of the pits with his lead intact.

However, the chasing Red Bulls of Vettel and Ricciardo were attempting to make their first set of soft tyres last to the end of the race, easing the pressure on the leader.

Hamilton stretched out more than 25s over Vettel before making his final pitstop with nine of the scheduled laps to run, but this was not enough to keep him ahead.

Hamilton just fended off Ricciardo into Turn 3 as Vettel claimed the lead, but with far fresher tyres Hamilton easily retook the place and drove on to win by a comfortable 13.5s margin as the race ran past the two-hour limit with a lap of the scheduled 61 to run.

Having jumped Vettel at the first round of stops, Alonso conceded track position to both Red Bulls by pitting under the safety car.

The double world champion sat behind Ricciardo waiting for his rivals' tyres to fall apart, but the Red Bulls held on to score their first double podium finish of the season, with Vettel bagging his best result of a difficult year in second spot.

Felipe Massa's Williams repassed the fast-starting Ferrari of Kimi Raikkonen for fifth at the first round of stops and raced on to a lonely finish, while Jean-Eric Vergne (twice penalised five seconds for exceeding track limits) scored a season's best sixth after gambling on a third pitstop after the safety car and using his fresher soft tyres to pass a train of cars in the closing stages with some bold late-braking moves.

Perez recovered from his wing breakage to execute a similar strategy to Vergne and finish seventh as the tyres on the cars around him gave up the ghost towards the end.

Raikkonen paid dearly for his earlier loss of track position, and trailed home eighth despite pitting for fresh tyres under the safety car.

Nico Hulkenberg and Kevin Magnussen rounded out the top 10, as the tyres on Valtteri Bottas's Williams - which ran as high as sixth at one point - gave up on him. The Finn trailed home a pointless 11th.

McLaren's Jenson Button also looked on course to score points, after a fine start and good strategy carried him from 11th on the grid to seventh, but the 2009 world champion's car broke down seven laps from the finish.