Vettel’s title hopes suffer yet another blow as he could only salvage 6th place, following a clash with Verstappen. 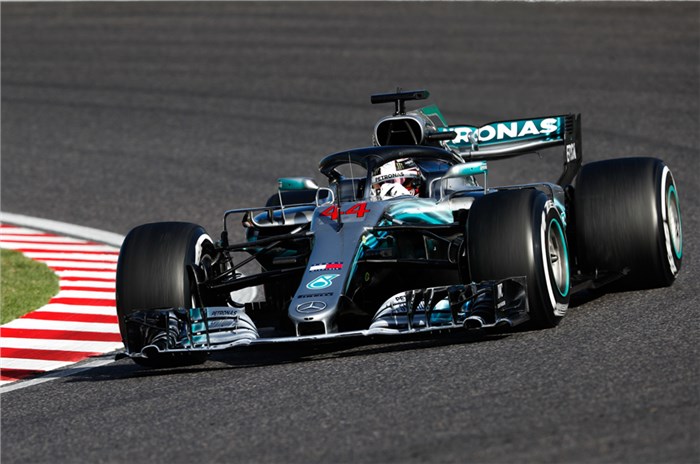 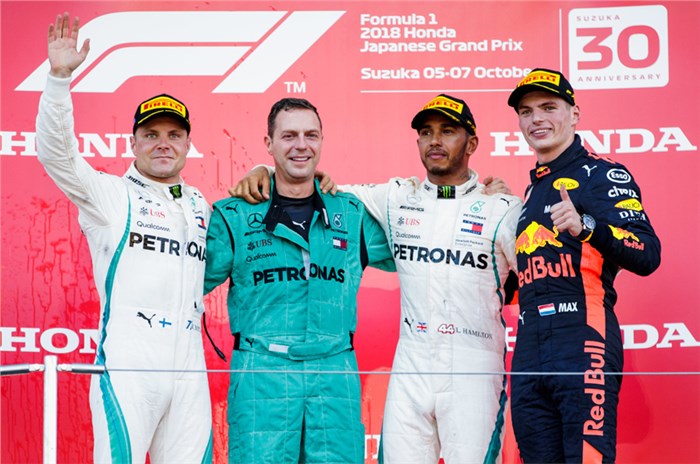 Lewis Hamilton is well on target to clinch the 2018 F1 drivers’ championship title after claiming his fourth consecutive race victory of the season in Japan – the Mercedes driver’s ninth win of the year. Further boosting Hamilton’s championship lead was the fact that Sebastian Vettel could only salvage a 6th-place finish after making contact with Max Verstappen early in the race.

It was a straightforward race victory for Hamilton, who held his pole advantage at the start and kept team-mate Valtteri Bottas at arm’s length till the chequered flag was waved. A difficult qualifying session for Ferrari saw Vettel start the race in 8th place, but he made a strong getaway and was already up to 4th place by the time the safety car was deployed on lap four. Kevin Magnussen's Haas picked up a puncture after he was rear-ended by Charles Leclerc’s Sauber. Magnussen’s car eventually shed the damaged tyre and the bodywork that splintered thanks to the flailing rubber; the safety car was deployed while the debris was cleared.

Verstappen was handed a 5sec time penalty for leaving the track and not rejoining safely as he locked-up entering the final corner on the opening lap, ran off-track and rejoined at the second part of the chicane. That resulted in light contact with Kimi Raikkonen, who was forced wide as he tried to pass the Red Bull on the outside, allowing Vettel to sneak ahead of his teammate.

Despite putting up a strong performance in the opening laps, things soon went downhill for Vettel as he attempted to pass Verstappen into the fast Spoon left-hander after the safety period ended. The Ferrari carried too much speed, made light contact with Verstappen’s Red Bull and spun onto the run-off. Although Verstappen managed to continue without losing position, the incident dropped Vettel all the way down to 19th.

Elsewhere, Daniel Ricciardo made steady progress after starting in 15th place. By the time racers completed the first round of pit-stops, Ricciardo managed to jump ahead of Raikkonen, with the Finn having to tackle traffic after Ferrari decided to pit him earlier. The lead order settled thereafter, with Hamilton constantly extending his lead as Bottas came under late pressure from Verstappen.

Bottas survived a mistake at the final corner with six laps to go, which resulted in him skipping across the chicane, to complete a Mercedes one-two for the second race in a row. Raikkonen drifted further away from the Red Bulls in 5th, while Vettel gradually made his way back to 6th – but by the time he was clear of the rest of the field, he was 1min behind Hamilton and 40sec behind Raikkonen.

Behind the frontrunners, Force India’s strategy helped Sergio Perez clinch 7th place. Romain Grosjean and Pierre Gasly ran 6th and 7th early on for their respective teams, but Force India stopped Perez and Esteban Ocon earlier than their immediate rivals. The fresh tyres allowed them to jump Gasly before Perez caught and passed Grosjean for 7th after a virtual safety car was deployed to deal with Charles Leclerc's stricken Sauber. Ocon was not able to match his teammate and finished 9th, with Carlos Sainz Jr beating Gasly to the final point after passing him late on.

Only three cars retired from the Grand Prix – Magnussen, Leclerc (who had also been rear-ended by teammate Marcus Ericsson just as they prepared for the restart after the safety car), and Renault's Nico Hulkenberg.

Hamilton's 67-point lead in the championship standings means that he only needs to outscore Vettel by eight points at the next race in the United States to clinch his fifth world championship.