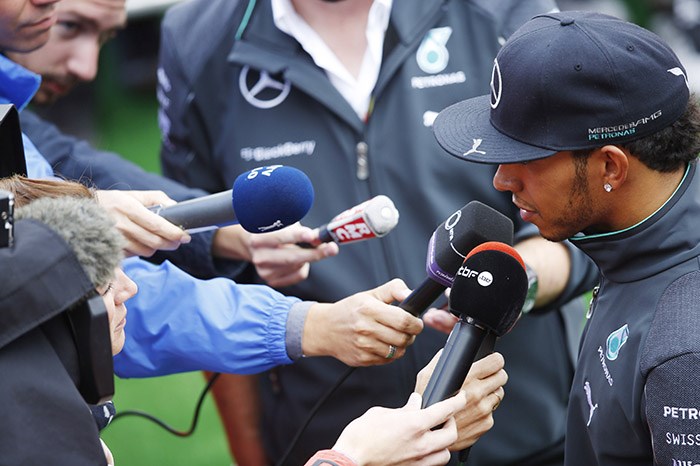 Lewis Hamilton claims that Nico Rosberg told the Mercedes Formula 1 team that he deliberately allowed their collision to happen at the Belgian Grand Prix "to prove a point".

Mercedes F1 chiefs were left furious when their drivers clashed with each other while fighting for the Spa race lead.

But Hamilton added a fresh twist to the events when he revealed on Sunday night that Rosberg confessed to having intentionally not backed out of the move on lap two because he wanted to teach his rival a lesson.

"We just had a meeting about it and he basically said he did it on purpose," said Hamilton.

"And you don't have to just rely on me. Go and ask Toto [Wolff] and Paddy [Lowe] who are not happy with him as well."

Hamilton said he had no doubts that he was an innocent party in the incident because he had the inside racing line.

"You know, and you can ask Fernando [Alonso] and you can ask all drivers, when a car is less than half a car length alongside you and you are on the inside, it's your racing line," he explained.

"It's not your job to go massively out of your way to leave extra, extra room. And it wasn't one of those corners where there's a wall there or anything.

"Look at Sebastian [Vettel]. He was actually further up [in a lap one move] and he knew he wasn't going to go out the other side. He was sensible about it."

Although there has been speculation all season that at some point the Mercedes drivers would collide, Hamilton insists that it was not as clear cut.

"We've been good at racing wheel to wheel, closely," he said. "I think I heard someone say that it was inevitable we were going to crash one day but I don't feel that today was that inevitability.

"I took the inside line and had the corner, we braked very deep into the corner because if I'd braked early he would have come down the outside, which would have meant he was alongside me through that section.

"But we went in very deep but I still made the corner as the same normal line that I would do normally. And then he was in my blind spot. But I can see quite far behind me and I knew he was behind so when I continued my line."

Hamilton said he was surprised the stewards did not look into the clash.

"I thought for sure there would be an investigation or something like that," he said.

"I'm mostly disappointed for the team - and of course for myself because I'd lose points and that makes my championship a lot harder.

"I was gobsmacked when I was listening to the meeting. You need to ask him what point he was trying to make because he just came in there and said it was all my fault."